MU Junior Ymbar Polanco-Pino leans on his faith to guide him. It’s something his parents instilled in him when he was a little boy. He witnessed them make unimaginable sacrifices for their family. Now, Polanco-Pino doesn’t let anything stand in his way. This mindset helped pave the way for his eventual research with NASA and immense success at MU. Of course, it is important to understand the journey that brought him here.

Polanco-Pino was born in Maracay, a city in north-central Venezuela. He has one sibling, an older sister named Olxandra. His parents Ymbar Sr. and Olga were next in line to take over a local church. However, through prayer, they saw a different future for their family. This future took place thousands of miles away in the America. So, they decided to take a leap of faith and pursue it. 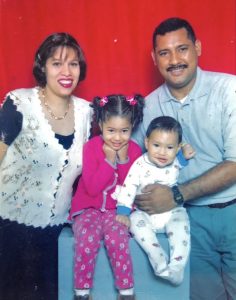 Brooks Scholar Ymbar Polanco-Pino at 1 years old, with his mother, father and sister in Venezuela just days before they came to America.

Not yet knowing if their tourist visas were approved, Polanco-Pino’s parents sold all their belongings to purchase one-way plane tickets for the four of them. After anxiously waiting, they were approved. Their new life was now within reach.

Polanco-Pino was just 1 years old when his family immigrated to the United States. The risk his parents took is something he doesn’t take for granted.

“Everything that I feel like has been going on in my life is based on my parents’ faith and how they’ve had the faith to take these wild steps,” Polanco-Pino said. “Literally anything’s possible if they made it here after doing stuff like that. They didn’t even speak English.” 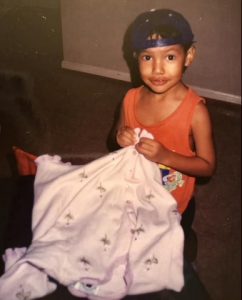 After 8 years of putting down roots in the U.S., Polanco-Pino and his family were deported back to Venezuela due to an error with their paper work. While their dream for a better life was temporarily put on hold, Polanco-Pino found a silver lining during this tough time.

After two long years, they moved back to the U.S., but their life wasn’t the same as before. 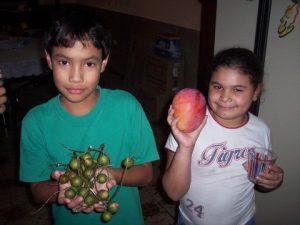 8 year old Ymbar Polanco-Pino with his cousin in Maracay, Venezuela after his family was deported.

“We went back to Flowery Branch and stayed at a little spot, this trailer for a year and my dad was working odd jobs because he lost his pastoral job,” Polanco-Pino said. “We were just waiting for the next step.”

The time finally came when his father was called to start a church in Carthage, Missouri for a Hispanic ministry. So, the four of them packed up and made the move to Missouri in 2010. They’ve been here ever since.

Being a person of color at predominantly white institutions in Georgia, Polanco-Pino always felt out of place. His high school experience in Missouri was no different. Because of the color of his skin, he felt the need to prove himself to everyone. This mindset consumed him as he tried to keep up with the unrealistic expectations of those around him.

“I feel like the pressure just fell on me. When I’m in college, I want to do it for my family. I want to support my family,” Polanco-Pino said. “That pressure eventually catches up to you and it starts falling on you, so I feel like that’s how I was.”

His desire to be the best led him to choose a career path in the hardest subject he knew: rocket science. As the time came to look for colleges to attend, he was reluctant to apply because of how his peers viewed his race. 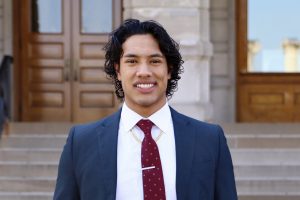 “I remember one of my friends was like ‘You’re Brown so you can get into good schools without having to actually be smart.’ I just remember that always stuck with me and I didn’t want to apply to places because then I felt like it was going to be taken like I was some diversity case,” Polanco-Pino said.

After some deliberation, he applied to MU because of its late application deadline. He also applied for scholarships and received the Brooks scholarship along with the Missouri Land Grant. The combination of both gave Polanco-Pino a full-ride to attend MU.

Now 3 years in, his major in mechanical and aerospace engineering has grown into something he’s passionate about. Reflecting on what he experienced in Venezuela, he has channeled his energy towards helping underrepresented groups.

“I remember the lights would always go out and I thought it was normal,” Polanco-Pino said. “And then when I came back to the United States, I was like, ‘Wow, the dangers that people face with a lack of resources and availability of technology. This is not right. There should be more people in the world trying to invest into these communities.’” 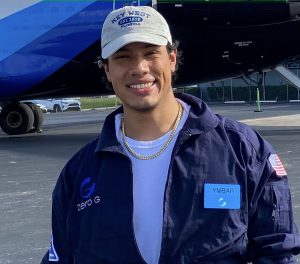 Remembering these thoughts, he’s found part of his purpose in life.

Polanco-Pino believes some aspects of science aren’t being utilized properly, though he is seeing a shift in the right direction. He wants to be part of that step forward in using science for good.

“I’m not passionate about engineering because I want to make this spaceship, or I want to make some rockets to go bomb another country. That’s what aerospace engineering usually is. It’s made for fighter jets and all those things and that’s not me,” he said. “It’s good that there’s a lot of forward thinking in engineering that is not just for science, but also for people.”

His road at MU hasn’t been entirely smooth. During his sophomore year he thought he was going to have to drop out.

This isn’t uncommon for engineering majors at the university, especially minorities. An estimated 60% of minority students don’t complete their engineering degree from MU. A reason the College of Engineering has collaborated with CASE to improve their academic retention. However, Polanco-Pino’s reason was not due to his grades. In fact, he had a 4.0 GPA. He was having problems with his financial aid. The university sent him a bill saying he needed to pay his full tuition. 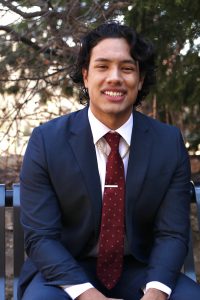 “I was like, ‘I’m not going to make my parents pay this much money that I know they don’t have. I’m not going to get us in debt,” Polanco-Pino said. “They worked so hard to stay out of that coming from the first generation. I know how much they work.”

He even began looking for jobs back in Carthage. Fortunately, the financial aid issue turned out to be a mistake in the university’s system. The damage was already done, though. His GPA declined as a result of this added stress.

“That was the first time I didn’t get A’s, but I’ve been working since then. [My GPA has] been going back up. That was the semester I almost left,” Polanco-Pino said.

Despite moments such as this, Polanco-Pino still keeps a level head and continues to push through. Even with the engineering school’s challenging workload, Polanco-Pino is thriving and has the grades to prove it. He has been on the Dean’s list multiple times including the High Dean’s list.

His older sister, Olxandra, thinks his motivation is a result of their family’s humble beginnings as well as their deportation.

“Just coming from literally nothing and then being blessed to be in the U.S., and then having to go from having everything to having nothing in a matter of days is definitely a huge part,” Olxandra said. 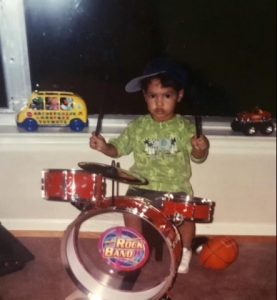 Their parents’ journey to the United States is a constant reminder for the siblings to never give up. Regardless of Venezuela being the poorest country in South America, their parents were able to go to school and chase their dreams.

“Our mom went to school to be a teacher and opened up her own little academy and just knowing that she did that with so little money, and we have so many resources, so many opportunities. We’re bilingual. It makes you push yourself,” Olxandra said. “If she could do it [while] having nothing and we have everything, why shouldn’t we?”

According to their father, Ymbar Sr., the kindness he and his wife show to their church members is what started his son’s passion for helping those who need it most.

“Our daily work in the community is to try to help everybody. That is my purpose here. My wife, too. We try to talk with the people and help in any way,” Polanco-Pino’s father said. “If they need something physical, we try to help. If they have a spiritual need, we immediately can help them too.”

“[Ymbar] can see that everybody, especially my dad and my mom, taught us to work from when we were children. Everything that we gained in the family, we gained because we worked together like a team,” he said.

Working together and standing strong in their faith, Polanco-Pino and his family were able to overcome their trials and tribulations and make a life for themselves in America.

Polanco-Pino’s time at MU has been spent seizing every opportunity that comes his way. His hard work has given him the chance to attend MU for free while being in the Honors College and a McNair scholar. He’s been involved in the Discover Program, the Students Underwater Robotic Foundation and the Mizzou Space Program. 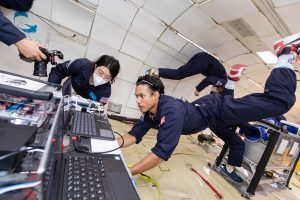 Back in November, he earned the opportunity to travel to Fort Lauderdale, Florida to do research. This project was funded by NASA. Their research was on electrowetting, analyzing how water droplets react to electricity in microgravity.

“I think that experience was a nod to me just being bold and experiencing things and trying to be a part of research that I didn’t think I was capable of doing,” Polanco-Pino said. “I didn’t think I was qualified to be a part of that project, but I was because I took a chance and I think in life, there’s going to be many more times that I take chances and end up in a really cool place.”

Polanco-Pino’s will to take chances has proven beneficial in the past and present. He applied to summer research programs with Stanford, Purdue and MIT. He was accepted into every single one of them.

He has chosen to take part in the MIT Summer Research Program (MSRP). Polanco-Pino will spend the summer in Cambridge, Massachusetts as a research intern as he continues to gain hands-on experience and build his resume.

Being a Brooks scholar and part of the Summer Bridge Program prior to his freshman year, the CASE department is where Polanco-Pino first found a sense of belonging.

“I was able to have a community of people that have my back and I have their back. I don’t know where I’d be without the friends that I’ve made there and that I’m going to continue to have for the rest of my life,” he said. “CASE was the foundation for me to walk into everything that I am, the fullness of who I am as an individual. Rather than just someone who excels academically, I now know I could be more than just that.” 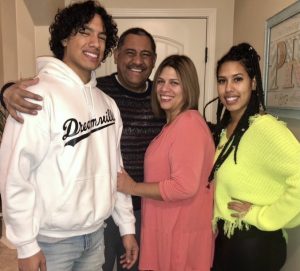 CASE Scholar Ymbar Polanco-Pino is all smiles hanging with his family.

Using his love for his family, God and public service, Polanco-Pino’s goal to use science as a means to spread peace is just beginning.

“In the years to come, I’m going to keep taking chances and walking by faith like my parents did when they came to the United States,” Polanco-Pino said.

His parents’ sacrifices were not in vain. He’s living proof of the “American Dream”. Polanco-Pino has had many successes up until now, but he’s only scratched the surface of his potential. Sky’s the limit for this future rocket scientist.