When Paul “Isah” Odu Jr. interviewed for the opportunity of a lifetime, he was grateful and confident, not nervous. Through the selection process for the Kinder Institute Fellowship at Oxford University, a situation where others might be self-conscious or anxious, Odu was the definition of calm, cool and collected. 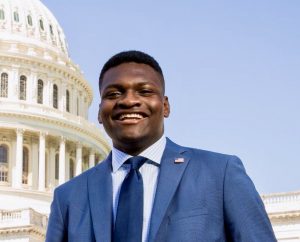 MU Senior Paul “Isah” Odu Jr. poses for a photo in front of the U.S. Capitol Building during his first internship in Washington, D.C. for the U.S. Senate in 2019.

His resume could speak for itself: an award-winning student in MU’s Honors College with a double major and a minor, avid writer, founder of The Missouri Debate Union and active community member. Odu has already published several articles in different publications including “The Burqa Ban: A Discourse on Post-Secular Religious Freedom” which was the 2020 Artifacts Award Winner.”

Writing and research is a passion of Odu’s. He currently serves as an associate editor for the Midwestern Citizen. His first published work was “Digital Money’s Precarious Promise: The Present & Future of Central Bank Digital Currencies”.

“I enjoy writing nonfiction, sort of long form things,” Odu said. “For my first, I wanted to do something, not big per se, but something substantive. I had been doing a lot of research on central bank, digital currencies, cryptocurrencies and the future of money in general. Being an Economics major, money is pretty fascinating to me. I wanted to just study how not only could this digital money be used to promote faster payments and greater access to the banking system, but larger questions of equity and financial inclusion, which I think is really important, especially going into a period where there’s a lot of uncertainty.”

It’s clear, Odu is an impressive young man with many accomplishments. He speaks of all the great experiences he’s had with a thankful tone. The most recent experience for Odu was being selected for the prestigious Kinder Institute Fellowship at Oxford this Fall to study the Global Middle Ages and the concepts of liberty, commerce and power throughout British and European history. 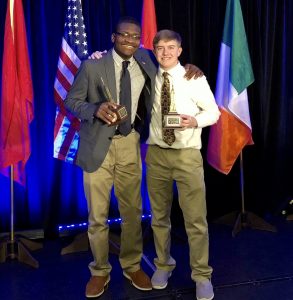 “That was probably the most enjoyable interview experience I think I’ve ever had,” Odu said. “It was literally a conversation. We spent a good part of the time talking about soccer and the whole Super League fiasco that happened during that semester, but they just really wanted to see what I thought about substantive issues.”

From soccer to British history to political culture, Odu was in his element. As a University of Missouri senior studying Constitutional Democracy and Economics with a minor in history, he was prepared through his experiences and coursework, even if he wasn’t exactly expecting the specific questions. During high school, he spent his weekends and free time competing in Mock Trial and multiple formats of debate, including public forum, congress and parliamentary. As part of Rockhurst High School’s Mock Trial Team, Odu won Best Attorney at the World Championship in New York City in 2017. He was engaging in legal discourse even before he enrolled at MU.

Once he got to MU, he could explore his interests in technology, finance and economics with his peers and mentors. While his background and interests gave him the knowledge to answer deep and thoughtful questions about the world, he also had a mentality that helped him remain grounded. 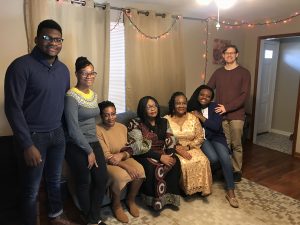 Paul Odu Jr. gathers with his family at his sister’s house in Kansas City for Christmas. His aunt (middle) was visiting from Nigeria.

This mentality reflected his dedication, but also his family. As a second-generation immigrant from Nigeria, Odu valued education and understanding politics.

“It’s crazy because my parents actually won the lottery to come to America,” he said. “I have a very different sort of perspective and a very different view than the average person. That’s something that’s been pretty formative. But, I’ve been blessed to have such a great family. I’m blessed to have such a great support structure with my four sisters, and my mom is the best mom in the world. She really wants all of us, myself and my sisters included, to be the best version of ourselves that we can be.”

For her part, Odu’s mother, Philomena, had faith in her son based on his commitment and background.

“I’m not surprised that he’s accomplishing what he is accomplishing because he really works very hard,” Philomena Odu said. “I encouraged him all the way. The culture and the tradition is that most of the family members, they’re highly educated. I’m very happy that he is just following everything he’s seen in the family in terms of education. I’m just thankful to God that he’s doing what he’s doing.”

Prior to enrolling at MU, Odu went through an interview process for the George C. Brooks Scholarship. After his mother and sister picked him up from his high school in Kansas City, they drove to Columbia. The next day, Odu went into the interview without the knowledge of how this one interview may affect his life. Odu wasn’t stressed. 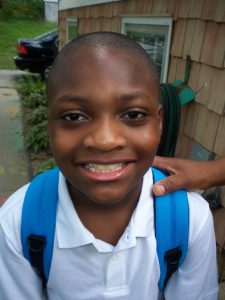 A young Paul Odu is all smiles for his first day of sixth grade in Kansas City.

“I felt there was an opportunity that I had been blessed with to share my perspective and be able to alleviate the financial burden of college with it,” Odu said. “I was feeling pretty good walking to the interview. It wasn’t really stressful. It was just that sort of nervousness that’s natural with anything sort of scholarship related to putting yourself out there for someone else to judge.”

Odu walked into the room with a philosophy that would carry him through more than just the Brooks Scholarship interview.

“I just went into the room saying, ‘I’m just gonna control what I can control and hope for the best,’” Odu said.

With an ease that many his age may not have, Odu had a great conversation. Through the process, he met some people he now calls his friends. On a bus ride home, his phone rang with good news. Odu didn’t believe it at first, but he had gotten the scholarship. He was destined for great things at MU, and he didn’t even know it yet.

In the space between that phone call and today, Odu has explored the interdisciplinary nature of academics. While maintaining a strong academic standing, Odu has worn quite a few hats, such as serving as a U.S. congressional intern, an intern with the mayor of Kansas City, a Microeconomics teaching assistant and as mentioned earlier is an associate editor for the Midwestern Citizen and founder for The Missouri Debate Union. 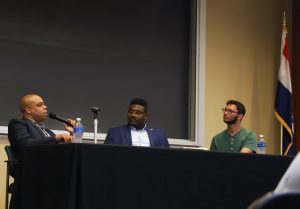 Founder of The Missouri Debate Union Paul Odu Jr. listens closley during a speaking event he organized in Jesse Wrench Auditorium in August 2021. He hosted MO Democratic Party Chair Michael Butler along with the Mizzou Democrats.

Odu’s approach to academics is almost athletic. In the same way that athletes review past performances, Odu evaluates himself to improve for the next opportunity.

“Having someone take a chance on you is something that I think a lot of people overlook, and I firmly believe that I am where I am because of the support of the people around me,” Odu said. “I needed to rely on the support of my friends, I need to rely on the support of my family, my mentors and my professors. No student is successful by themselves. It really does take a village for people to cultivate talent, develop talent, develop interest, and that’s something that’s really dear to my heart.” 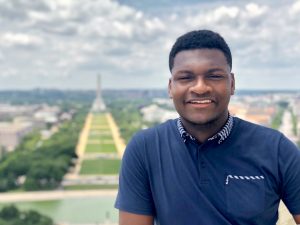 MU Senior Paul “Isah” Odu Jr. takes in the views at the top of the Capitol Building’s dome during his first internship in Washington, D.C. in 2019.

From the strength gained through his family, his peers, his mentors and the support offered by academic programs such as the Center for Academic Success & Excellence (CASE), Odu has had the chance to explore his intellectual interests, which will benefit his future.

“After college, I plan to complete a fellowship overseas to either study economic data analysis, public policy or comparative legal history,” Odu said. “Then, I want to start law school in the U.S. but I think that being able to show that I do have an interest in these fields, and I do have the ability to write, there’s nothing that’s more important for me.”

From academics to creating spaces to remain politically active, Odu has contributed to the academic environment at MU in a way that many have applauded. In his humble confidence, he has showed the Mizzou and larger academic community the strength and character that helped him achieve such greatness.

While he gives a lot of credit to the people who surround him, Odu’s gratefulness and his dedication to what he is passionate about have carried him to Columbia, Oxford and the world beyond.