On the first day of her junior year in high school, MU junior and Brooks Scholar, Alex Becks faced an important decision. Her choice, ultimately, would lead her over a thousand miles away from her home in Chicago but provide a unique experience and opportunity for growth.

“I decided instead [of attending public school] to go to the LAT Tennis Academy in Florida which was amazing and taught me a lot about myself and what it meant to be mature and responsible because I was down there alone,” Becks recounted. 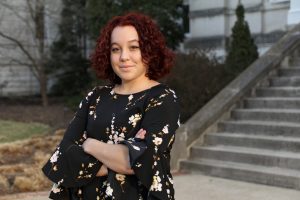 Coming from a family of athletes, Becks was involved in a variety of sports and activities; however, she initially struggled to find one she liked. At the age of 12 her parents suggested she try tennis and she soon found herself on the tennis court with her family and friends. The sport stuck and Becks improved, making the high school varsity tennis team as a freshman.

“I stayed because it was the one [sport] I had a lot of fun in. What keeps it fun is when you get to a certain point when you’re playing amazing and you feel as if you are crushing every shot, the people around you are complimenting you on how you finish the point,” Becks said. “It’s fantastic and if you’re around the right group of people it becomes just this fun thing that can be leisurely but at the same time incredibly competitive.”

Since childhood Becks’ independent and competitive drive to create her own unique path and achieve success was encouraged by her parents.

“I think from a very young age we stressed independence to the kids and that they need to be able to learn how to do things on their own and problem solve,” Charlie Becks, her father said. “I think that’s played a big role in her life so far, especially as she works towards a degree in medicine.”

During her last year at LAT Tennis Academy, Becks and her parents researched various colleges with tennis programs and academic recognition, adding them to a spreadsheet. Mizzou was not on this list until Becks received a letter in the mail from the university, encouraging her to apply, not as an athlete but as a regular student.

After submitting her general admissions application to MU, she received a notification from the Center for Academic Success & Excellence (CASE) to apply for the George C. Brooks scholarship. Shortly after applying for the four-year scholarship, Becks was invited to campus for an interview for the final stage of the scholarship’s consideration process. Touring the campus, she realized Mizzou was the school she and her family had always envisioned for her to attend.

“I knew that I wanted a big college, a big campus with a lot of students. I wanted somewhere that had seasons because I was not a fan of the fact that Florida is just warm all year round. I wanted a football team that I could get behind because that was a big thing for my family and just generally a place that I felt would support me,” Becks said.

“The people within Brooks and CASE made it very clear that they would do everything they could to support me and that was before I even started tacking on things like [Initiative for Maximizing Student Diversity] (IMSD) and [Maximizing Access to Research Careers] (MARC).”

Becks still had to decide whether or not she would play tennis as a collegiate athlete. Late in the summer before her freshman year of college, Becks had a crucial conversation with the MU tennis coach. After discussing with him areas of improvement in her game, she decided she would not be able to improve those skills by the start of the tennis season. She would have to forgo playing tennis for Mizzou.

“Unfortunately, there was no more time to work on it. It was the end of summer going into [my] freshman year at Mizzou,” Becks said. “I didn’t have the time to put in that extra training, but I decided even without the varsity sport add-on, that I still liked Mizzou as a school for the academics and generally the people that I had seen before.”

Becks continues to play tennis with friends and is part of MU’s club team. She hopes to have more opportunities to play as warmer seasons approach.

Sports was a major point of connection for Becks and Amand L. Hardiman, former first year coordinator for Brooks Scholars.

“I still actually do my best to try to keep in contact with him just because he was so incredibly helpful and supportive of me when he was still there,” Becks said.

Hardiman remembers Becks as a determined student eager to connect with and seek guidance from those around her.

It was during one of these conversations that Hardiman recommended Becks for IMSD, a research and professional development program for marginalized students.

“The program is really built for leaders and I think she is a leader,” Hardiman said. “I could tell the way that Alex’s brain was operating or just the way that she conceptualized things she could actually get involved in research to find those answers [to her questions]. She could really be in an environment that supports her natural curiosity, and she could see that there were other minoritized students that also had this type of scholarly curiosity and that she was not alone on campus as a minoritized student that had these types of questions.”

As a member of IMSD, Becks has attended seminars and conferences and serves as a mentor to other IMSD peers. She has also received the MARC fellowship, a grant for underrepresented and marginalized juniors and seniors in biomedical research, through her participation in IMSD. 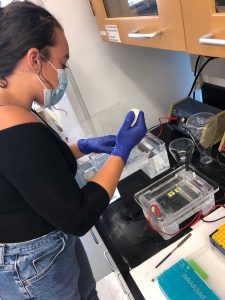 With this grant, Becks was given a stipend for lab research and experience for summer of 2020 and for the current 2020-2021 academic year. She works in the neurobiology lab of MU professor, Dr. Anand Chandrasekhar, alongside a graduate student and is preparing her main project on neuronal migration to apply for the MARC fellowship a second time.

She plans on pursuing a career as an allergist but would also like to do research in immunology and allergies. She intends to pursue a M.D. and Ph.D. dual degree to continue and combine these interests.

“I still love science and I got into research, got a glimpse of it my freshman year and got into doing it myself my sophomore year, and that’s not necessarily something that I want to give up, so while I love the medical field and definitely want to be a part of the medical field, I don’t want to lose my connection to research and science as a whole,” Becks explained.

Part of her inspiration in studying allergies is based on her own experiences.

“I think ultimately she may have her eye on trying to find a solution for allergies so other kids don’t have to go through what she had to go through,” her father noted.

Becks is allergic to eggs, milk and red meat. After a life-threatening allergic reaction when she was a baby, she and those close to her have learned to exercise extreme caution with her exposure to foods.

“Nine times out of 10 as soon as I say those three things to anybody, they’re like, ‘Oh my god, that is so much of what I eat,’ because it is a huge part of the American diet,” Becks said. “I’ve had challenges with that throughout my entire life and I genuinely want to help people that have gone through the same struggles as me because I know how annoying it is and how it comes up in the weirdest and most obnoxious ways.”

Looking to the future, Becks hopes to discover a scientific or medical breakthrough similar to those she has read about in textbooks and journals.

“I think that it’s the coolest thing ever if you are able to do something that impacts the world around you so much so that people feel as if everybody needs to know about it because that means that you have helped an incredible number of people and you’ve changed the world for the better,” Becks asserted.

In all aspects of life, Becks aims to serve as a leader for those to look up to, in a similar way as one particular groundbreaking scientist.

“My personal inspiration is Mae Jemison who is a physician scientist and was the first African American woman in space,” Becks explained. “I don’t plan on going to space but she is a constant inspiration to me and hopefully I can be that for somebody else.”

So far, Becks has already begun work as a leader and those who know her agree that she already possesses many of the qualities that will contribute to her success in medicine, science or any other path she embarks on.

“Her future is bright. I think Alex has a really good opportunity to be a leader in whatever endeavors she decides that she wants to do,” Hardiman said. “She has the determination, the passion and more importantly I think she has the thick skin to withstand a lot of the adversities that come with being a leader and particularly being a minoritized woman that is a leader.”

Through her resolve and diligence, Becks has found her place at the university and as a result, has been able to grow, learn and thrive in the many opportunities presented to her.

“We’re really excited for her as parents and we’re really proud of all the things that she’s done and then will do in the future,” Beck’s father said. “I think she made a great choice in choosing Mizzou and it’s really helped her flourish. I think as much success as she’s had, a lot of it has been because she picked the right place, and the school and the students and the teachers have really helped her succeed.”