The day started rainy and cold just like any typical Missouri day in March. But what most did not know is that, an event unlike any other was going to take place. The first Missouri Statewide Pre-Law Diversity Conference took place on March 9, 2019, and was created by Mizzou’s very own senior, Tyler Brumfield, Political Science major with a concentration in Black Studies and Constitutional Democracy. 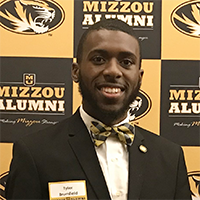 The purpose of this conference was to connect young aspiring diverse lawyers to current professionals and give insight into what the profession is like being a person of color. I am no law student and do not understand the first thing about taking the Bar Exam; but what I clearly understood was the passion and determination Tyler had when he started out the Brumfield wasted no time trying to make a difference at Mizzou. The track list of his involvement is nothing short of extraordinary. Freshman year, Brumfield worked at the Gaines Oldham Black Culture Center (GOBCC), was a member of the Legion of Black Collegians (LBC), and was voted LBC Homecoming Freshman Count. Sophomore Year he was a part of Marching Mizzou, and during his junior year he was elected LBC vice president. His senior year, he was voted Homecoming King, a Mizzou ‘39 recipient, which recognizes outstanding seniors, and he is also the president of the Mizzou Black Pre-Law Student Association (MUBPLSA). 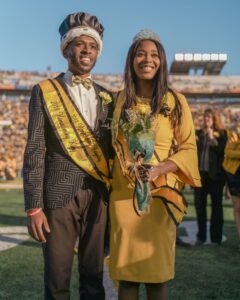 When asked about why he was so deeply involved, Tyler simply said, “[He] saw the work that needed to be done”; and that is essentially what motivated him to run for president of the MUBPLSA. When Tyler was only a sophomore he attended the National Black Pre-Law Conference and Law Fair on the campus of Harvard University by himself. Empowered by what he experienced then, he returned to Mizzou with a campaign promise that if he was elected president, he would take MUBPLSA with him the following year. A promise that was surely kept. Tyler says that he does what he does because he understands how imperative it is to have representation. Tyler stated that currently, only 5% of the legal profession is minorities and people of color. Harvard gave Tyler exposure to what he and those like him were capable of. If today’s generation does not understand what is possible for them now, that statistic may never change. 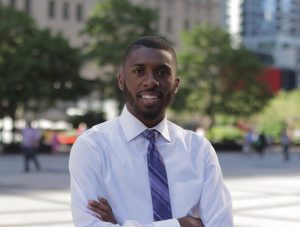 When asked what the Center for Academic Success and Excellence (CASE) has done for him, there was no hesitation in mentioning Donell Young, Director of CASE. Brumfield said he looked to Young as a law mentor. Young, receiving a degree from the University of Missouri School of Law in 2016, had a lot to share. Brumfield would sometimes just sit and observe Young to watch how he conducted himself. It is clear that Young, who has his Juris Doctorate (J.D.) from Mizzou, had an influence on Tyler as he has gone onto become the leader that he is today.

It is no understatement to say that Tyler Brumfield has accomplished extraordinary things at Mizzou. His drive and passion are nothing to go unnoticed. His next steps after Mizzou include working as an Analyst at a Tax Law Firm. If Tyler left me with nothing else, it was the message that we have the power to be; and if we are truly committed, then it will come. Good luck Tyler, we all know that you have a bright future ahead of you!