Creativity runs through the Hardy family, and MU Junior Danielle Hardy is no exception. From an early age she danced in front of crowds of hundreds. As she grew up, Hardy discovered her latest passion: photography. 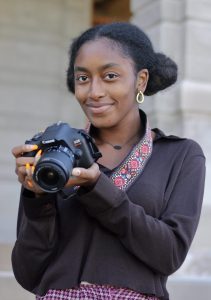 Brooks Scholar Danielle Hardy poses for a photo as she holds her camera outside of Jesse Hall on MU’s campus, Wednesday, Nov. 3, 2021. (Photo/Braiden Wade)

To her family, this is not the initial direction they expected Hardy to take. Even for Hardy, when it came to college, MU was not the place she believed she would end up.

Starting at the age of two, Hardy danced for 16 years of her life, performing every style of dance from ballet to contemporary. Dancing in pre-professional companies and performing in a few professional company shows like at the Kauffman Center for the Performing Arts, Hardy traveled constantly for competitions and summer intensives. At 13 years old, she attended a summer intensive in Houston, Texas, far from her home in Kansas City, Missouri where she had dance classes every single day. This was Hardy’s normal, so it is no surprise she envisioned herself being in a prestigious dance program after high school.

“Beginning of senior year, I realized that I couldn’t identify myself outside of dance,” Hardy said. “When I sat and thought about it, I was like: ‘What am I? What do I do besides this? I don’t want to be categorized in this box forever.’ So I was like: ‘Okay, I want to channel my creativity in a different way.’”

Throughout high school, Hardy enjoyed taking photos of her friends around the Kansas City, area. In Hardy’s search for something new, she realized this fun hobby could be turned into her next pursuit. What Hardy described as a switch of mindset allowed her to draw inspiration from other photographers’ work.

For her whole life, dance was the only passion Hardy felt most strongly about –– until agreeing to a photoshoot changed her entire trajectory. Hardy knew she was modeling for an acquittance’s shoot, but she didn’t expect to gain as much as she did. After watching the photographer and experiencing their process, Hardy was sure this was something she wanted to try with her own creative perspective. 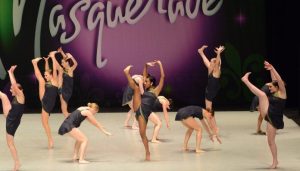 MU Junior Danielle Hardy (center) dances with her team at a regional competition at Kansas City Music Hall during her junior year of high school when she was 17.

“I realized that I had more potential to me than just being a performer and being a dancer,” Hardy said. “I could always come back to that and take classes and stuff and feel that part of myself that I still loved. But pursuing something else, and finding my creativity and another part of my life, that’s why I kind of accepted trying to go to Mizzou.”

As she was deciding which college to attend, Hardy decided to apply for the George C. Brooks Scholarship at MU. Hardy enlisted critiques on her essay from Melissa Weihn, her high school teacher and cheer coach. Weihn was more than happy to oblige.

“[Hardy] is incredibly motivated and diligent,” Weihn said. “She always wants to do the best for herself. And a lot of times, our students get wrapped up in the idea of competition with one another, where they’re looking at class ranking or GPA…I don’t know that that was really her motivation to succeed. I think that she was looking at herself and saying: ‘I want to do the best for myself.’”

Christmas Day is a time full of surprises and memorable family moments. In the holiday season of 2018, the Hardy family had perhaps one of their best Christmas mornings. Instead of finding this gift under the Christmas tree, though, Hardy received her exciting news in the mail; She was offered an interview for the Brooks Scholarship. 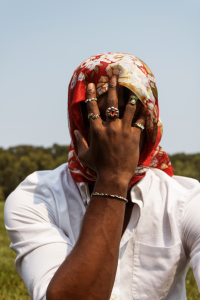 CASE Scholar and Marketing Intern Braiden Wade models for a photoshoot with Danielle Hardy. Hardy’s intention with this shoot was to dispel black toxic masculinity and stereotypes.(Photo/Danielle Hardy)

It all clicked for Hardy when she arrived at MU with her parents for the interview. The university she thought may limit her options, was the place Hardy realized could set her up for anything she wanted to do with her future. Hardy’s interviewers must have seen this unlimited potential within her. Upon discovering she earned the Brooks Scholarship, Hardy’s mind was made up. She came into MU undecided and ready to explore the possibilities.

“The Brooks Scholarship really was the deciding factor of me coming here,” Hardy said. “I feel like that was door opening to people I’ve met here: connections, networking, friends. I really owe that to Brooks.”

Hardy’s mother, Rochelle, expressed appreciation for her daughter’s achievement. From a financial perspective, this scholarship saved the Hardy family a lot of money, as the costs of private schools and competitive dance added up over the years.

“I didn’t go to college,” Rochelle Hardy said. “My husband didn’t go to college. So, in our family here, we were just so so proud of her. Especially when she got [the Brooks Scholarship]. I would always say [to Danielle]: ‘toot your horn,’ it was pretty exciting.”

Although her parents did not get the opportunity, they encouraged Hardy to apply to colleges anywhere she wanted to go. With a dedication to excelling in her academics, Hardy always knew college could be an option. Being a first-generation college student, Hardy is doing something extremely important, but she believes this pursuit goes beyond just herself.

“I never really think about being a first-generation college student,” Hardy said. “I know that it is very exciting for my parents, and they have a lot of pride in the fact that I am pursuing a higher education. But they never would have taken that path for themselves. So, in a way, I feel that I am more grateful for my experience when I think about them.”

During her time at MU, Hardy has taken advantage of many opportunities and it is evident by her impressive resume. Hardy is a creative lead at Relevant Youth, and for a segment of Relevant Youth, she has done a few shoots with client J. Artiz. Another way she flexes her creative talents is in Shot Reverse Shot, which has her on the editing and pre-production teams. In her busy schedule she also fits in time as an intern for CruzX, an athleisure brand housed in the Student Center. Even with all of her other involvements, Hardy dedicates time as a mentor for Desire to Aspire. 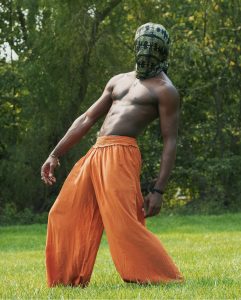 This is Brooks Scholar Danielle Hardy’s photo that made it into the Bellwethers 2021 juried art exhibition at the University of Tennessee at Martin. (Photo/Danielle Hardy)

Astonishingly, Hardy still has more to add to her experiences. Aside from working on other projects, Hardy is also a freelance photographer with a small business called Ellevated Photography which she started in the summer of 2020. Hardy calls the website her “portfolio”, and she is constantly updating it with her projects. Although Hardy does not acknowledge her business as “super sophisticated”, she has created business cards and puts any and all completed work on the website.

In her most recent accomplishment, Hardy’s work was displayed in Bellwethers juried art exhibition gallery at the University of Tennessee at Martin. She is still anticipating results from the judges. The photos that earned her spot in the exhibition were part of a photo concept series.

Learning the skills of photography for Hardy came from self-teaching, experience and the inspiration she draws from everyday life. Her first formal class with photography was not until this semester after she declared her major as digital storytelling with minors in black studies and art photography. Rochelle Hardy believes her daughter’s natural artistic abilities are rooted in Rochelle’s family, whose brothers are all artists.

“[Hardy] has an uncle who lived in New York for 20 some years as a designer, and they’ve always either sewed or drawn pictures,” Rochelle Hardy said. “That bug –– it hit her. It skipped over me, but I guess it hit her. I was amazed in how much she’s grown in photography.” 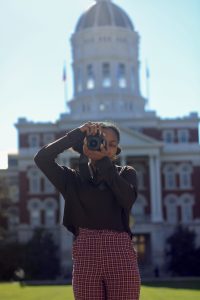 The concepts behind Hardy’s photos are linked to her future aspirations. Inspired by photographer Tyler Mitchell, Hardy always looks for ways to capture joy in the black community. Tied into her love for photographing people, she hopes to go into editorial styled photography or the entertainment industry as a casting director. Hardy says as a casting director she could be the “first line” of ensuring diverse representation.

“Who we see represented and how accurately they’re represented really affects how people in real life treat the people that they see,” Hardy said. “I feel like [representation] is really important in story development.”

Immediately after graduating from MU, though, Hardy looks forward to traveling.

“One of my other passions is travel, so I want to go teach abroad in Asia or something,” Hardy said. “If I don’t do that, then I want to move to Australia or New Zealand.”

No matter where Hardy ends up, her devotion to creativity and storytelling will follow.