For those who come into contact with Angela Vick, her genuine care for students is undeniable. In addition to her various duties as administrative assistant for the Center for Academic Success & Excellence (CASE), she makes time for students, inviting anyone into her office to help address their questions and concerns.

CASE ambassador Elijah Brown recalls an instance when Vick tended to a student who arrived at the office noticeably in distress. That same student returned to the CASE office a week later.

“I don’t know what was said but it must have had a great impact,” Brown remarked. “The girl was 100% happier, just an entirely different person. Ms. Angie definitely has the Midas touch when it comes to helping people out, making them feel better.”

No matter how big or small the issue is, Vick will do her best to remedy it. Josiah Callaway, a CASE ambassador, remembers when he disclosed to Vick financial difficulties he was experiencing.

“Just talking with Ms. Angie, she helped me out a lot, [by] getting me those extra hours, helping me do that job and just helping me actually be happy to work there,” Callaway said.

Vick implements an open-door policy to build relationships with students whether they’re a CASE scholar or not. She especially takes pride in assisting with their professional development.

“I enjoy hearing about students, their days, their weekends, their families, their vacations, some of the things that they are going through,” Vick explained. “I’m a listening board and getting to know them on more of a personal basis and building that trust is huge, and [by] allowing students to come in and talk to us, they create not only a personal relationship with us but it’s giving them the chance to communicate with professionals.”

“I’ve had several students come in where they just wanted to tell her that they got a scholarship or they got that job they applied for,” Lopez said. “She genuinely cared and remembered that those students had something big coming up.”

It may come as a surprise, but Vick’s passion for serving students has not always been her career choice. She ended up at CASE in a similar way a student may discover an interest in an unexpected class.

“That’s kind of the same way this was for me, you know? It leads you down a path that you don’t expect,” Vick said.

In 2015, after working 20 years in oncology clinical research at Mizzou, Vick was laid off.
Needless to say, she was devastated. Pouring your heart into a place for over two decades isn’t easy to move on from, but Vick would quickly realize, things have a way of working out. 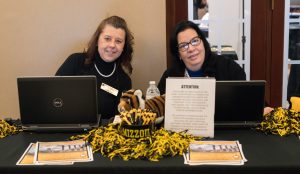 She began applying fo jobs and had to make a choice to either stay in healthcare or change careers completely. Even as she filled out the application for her current position, she was unsure of which route to take. But that decision soon became clear after her interview.

“I came in for the interview and met Donell and I have to say, that the minute the interview ended, and I walked out the door, I knew this is where I wanted to be,” Vick recounted.

Vick was the first hire of former CASE Director, Donell Young. Young sought individuals with specific qualities he believed were necessary to carry out the office’s mission.

“I could tell she had passion and she really wanted to help people, so that was important to me,” Young detailed. “She seemed very professional and she had several years of experience working at the hospital, and I needed someone that could hit the ground running, working with our students, supporting our students.”

Although working with students was a first for her professional career, Vick had previous volunteer experience that began a couple of years prior to her being hired at CASE. In 2013, Vick joined a parent mentorship at a local high school to become more involved in her son’s musical interests. As a mentor, she supported high school students who faced obstacles on their path to achievement.

“For four years I was in that position of just really being a listening board for them and being there for them when their parents or their family members couldn’t,” Vick said.

The experienced Vick gained as a volunteer has paid dividends for the work she does now. The once crippling news of being let go from a job she loved in healthcare has turned into a new, fulfilling career.

“I enjoy watching students grow and overcome some of those barriers that are put in place for them,” Vick stated. “Coming to college is difficult to overcome and so just being here and being able to be a good listener, to support them, to help them grow professionally, and gain some career skills outside of the classroom, it really makes me feel good about what I’m doing and so that’s why I am where I am.” 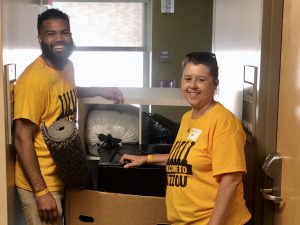 Vick is also known around the office for her natural ability to guide, multitask and manage the responsibilities of the office. From the start of her employment, it was apparent that Vick could adequately handle multiple tasks at a time, prompting Young to give her more assignments.

“She wanted to be engaged, she wanted more complex duties,” Young said. “She was always one of the first people to get things done, very detail oriented.”

Vick is usually the first to arrive at the office and often one of the last to leave. She schedules meetings for the director, schedules staff shifts, sends letters, trains team members, gathers data and sources for CASE’s annual report, and much more. Many agree the office could not run as efficiently without her assistance and the sense of stability and direction she brings.

“I imagine that without her it’s just pure chaos,” Brown said.

Vick’s character is admirable. Her positive attitude is second to none. Compassionate, diligent, loyal, dedicated, supportive are some of the many words her colleagues use to describe her.

“If something happened that she felt was unfair, I would tell her ‘sometimes things are not right. We’ll address the system, but sometimes it’s not fair,’” Young recalled. “But she would take it hard because she wanted to make sure the students were thoroughly supported at Mizzou.”

“The main thing that I take away from her is her work ethic, how she goes about her day, how she handles her work because normally, she has 10 million things to take care of in one day,” Callaway said. “It always seems like an overwhelming task, but she always seems to get at least a few things done a day or just take[s] one step at a time.”

It’s tough to quantify Vick’s value to the CASE office. Students and professional staff alike recognize, without her, CASE would not be able to effectively support students.

“I feel like she’s the backbone of the office for sure, holds it all together. She’s a very important piece of the success of the office,” Brown said.

“She’s the heartbeat of the office,” Young said.

As students, faculty and staff return to campus in the midst of COVID-19, Vick hopes her impact on the Mizzou community can be summarized in three words: trust, respect and support.

“I just want students to feel confident about their interaction with me and know that no matter what, I have their back,” Vick said. “Being away from home is difficult enough and then adding in the pandemic on top of that is going to be challenging. Never before have we ever had to deal with some of these things, so I believe that especially this year, those three things are incredibly important.”