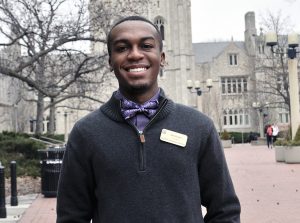 Before the start of his freshman year at Mizzou, Donovan Bradford got a taste of what college life was all about when he participated in the Summer Transition Program through Center for Academic Success and Excellence (CASE).

The program informed him about the many resources available at Mizzou and about the workload that comes with college courses. He experienced life in a residence hall living with a complete stranger and learned he didn’t need to raise his hand to use the restroom.

Bradford applied for the program during his senior year of high school, completed an interview in Columbia and was selected to complete the eight-week program designed the ease the transition from high school to college.

As part of the program, he and a small group of other first-time college students lived in the residence halls, took general education courses, learned study habits and experienced college life at Mizzou. This program, Bradford says, was one of the main reasons he applied to and decided to attend Mizzou.

“All of my fears I had about college, [the Summer Transition Program] addressed them and helped me work through them,” says Bradford, now a sophomore engineering major.

He continues his communication with CASE, working with them throughout each semester to make sure he’s staying on track and meeting his academic goals.

“At times I would get lost,” he says. “But, I always knew I could go to ARS to relax and make a plan.”

The sense of community Bradford felt at CASE encouraged him to branch out and get involved at Mizzou. He became a residential adviser, joined the National Society of Black Engineers and the Rollins Student Council. He’s currently exploring opportunities in undergraduate research and works in the ARS office.

The community aspect is one feature of CASE that has become particularly important for Bradford and many others recently at Mizzou. Throughout the events that occurred on campus in the past year, CASE has provided students a safe space to talk about their thoughts, feelings and opinions.

“During that time, we saw students that never came to the office before,” Bradford says. “They would come in and just sit in the lounge and talk. It was a place where students could express what they felt and get different perspectives. CASE helped a lot of students grow in their conversations.”

It’s that family aspect that has kept Bradford connected to CASE.

“These issues directly impact us as minorities at a predominantly white institution,” he says. “It’s comforting knowing that others are going through it with you.”