MU Graduate Angelique Allen has always kept herself busy. After moving from Westfield, New Jersey to Kansas City during seventh grade, she participated in several clubs and sports.

In high school, she was on the executive board for the Spanish National Honors Society . She also helped host a basketball tournament between the two high schools in the district called Hoops for Hope . This tournament was created to raise money for the Children’s Mercy Oncology Family Support Fund. In addition to all of this, Allen ran track throughout her high school career.

Sports is something Allen has always loved and when her parents opened their own gym called The Grind Cycle and Fitness during her senior year of high school, she was immediately hooked. Allen would attend her father’s spin classes and help at the gym.

“Just one day, my dad woke up and he was like, ‘We’re going to do this’ and so they found some real estate and started buying new equipment,” she explained. “[My dad] has been a cycling instructor for over 20 years or something. He’s been doing it forever.”

Both of Allen’s parents had the experience needed to open this gym. Her mother is an interior designer, and her father owned a business in New Jersey. 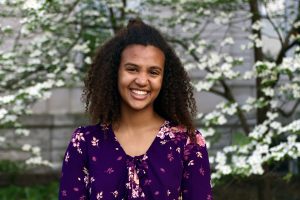 Though the first business Allen’s father opened ultimately had to shut down, he never gave up. He ran the gym until Allen left for college. He is now a pharmaceutical salesman. Allen credits him for giving her the drive she has now.

“I think he always wanted to get another business, something that could kind of be his. I think that there’s a fine line between being cocky and [having a] big ego versus being kind of proud of what you’ve done which I feel like I got from him,” Allen said.

As the time to attend college approached, Allen had her mind set on the path she wanted to take. Allen’s original plan did not include MU. She was going to go to the University of Arkansas because of connections she had there. Her passion was on the track. She wanted to compete at the collegiate level, but suddenly everything changed.

She injured both of her ankles and her dream of running track was over. This forced Allen to change her plans completely. She decided to hop on I-70 and make the two-hour drive to visit Mizzou. It was then, Allen knew, despite the bump in the road, MU was where she needed to be.

“I think the combination of not being able to do something I expected to do and not being able to run track, with going somewhere I didn’t really expect to go really kind of taught me that everything happens for a reason,” she said.

Allen received the Diversity scholarship through the Center for Academic Success & Excellence (CASE) to attend MU. Her love for sports migrated into college. Allen taught rock climbing at Mizzou Rec for the four years she was at MU. She was also part of the scuba club.

Like many freshmen, Allen began her first year undeclared but took classes along the path of biology. Her love for science blossomed from her father’s career in selling pharmaceuticals for disorders such as schizophrenia, bipolar disorder and diabetes. Though she was unsure of what her major would be, she ended up loving the classes she took at MU.

“I was like, ‘I feel like this is how science should be taught and how people should learn’ because it was very much like if you just show up and fully pay attention and are able to apply the information, you’ll be able to do well,” Allen said. “It was definitely intense at times, but I enjoyed learning it.”

Allen officially declared biological sciences as her major during her sophomore year and moved on to advance her studies. During her junior year she was accepted into the McNair Scholars Program and she began conducting research around neurodegenerative disorders.

Then something unexpected happened. The lab she was working in lost its funding and she had to resign. Allen didn’t let this deter her, though, and she applied for the McNair program again for her senior year.

She encouraged Allen to not give up and reapply. Fernandez wrote a letter of recommendation for the McNair program the first time around and didn’t hesitate to write another for her second application.

“I was really, really happy to hear that ‘Okay, I’m ready,’ so that’s why I said, ‘Okay, I’m writing it and you’ll see. I know that McNair will accept you this time as well.’” Fernandez said.

Just like Fernandez said, Allen was accepted again. This time she would be doing research around lizard behavior and cognitive work. However, Allen’s research occurred during the start of the Covid-19 pandemic, so she couldn’t do a lot of what she and her mentor had planned.

“I was going to work with lizards and look at ones that live in certain areas of Puerto Rico, and because of COVID, no one could actually travel to Puerto Rico to get those lizards,” Allen said. “So, we had to completely derail that project and I ended up doing mostly behavioral analysis on the computer.”

Allen watched hours upon hours of videos that had already been collected from other projects and used this to form her research. Though it wasn’t how she imagined, she gained a lot of knowledge.

“[It was] definitely not your typical lab experience. It was all really done virtually, but I enjoyed it. I thought it gave me a lot of cool analytic techniques that I might not have been able to focus on as much as I was in the labs,” Allen said.

The McNair program is geared towards preparing students for what it would be like in graduate school, something Allen had decided on doing when she was a sophomore. However, her interest had changed.

“After getting the scuba certification, and being like, ‘Well, marine biology is really cool,’ I kind of thought that mixing the two and going into research would be what I wanted to do,” she said. 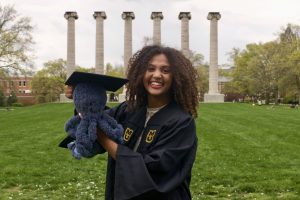 MU Alum Angelique Allen holds a stuffed octopus while taking her graduate photos in front of The Columns on MU’s campus, Spring 2021. Allen is working to earn her Ph.D. at the University of Oregon in neuroscience. She is studying octopuses and their cognitive evolution. (Photo/Emmett Ferguson)

Allen decided she wanted to work with octopuses and their cognitive evolution. With her goal set on doing this, Allen began searching for the right school to attend after she graduated from MU. Since MU doesn’t have a program that specializes in octopuses specifically, Allen decided to apply to universities that did: University of Chicago, Florida Atlantic University and University of Oregon.

Fernandez wrote a letter of recommendation for each one.

“You can see her determination and enthusiasm to pursue graduate studies in research in the field of neuroscience. How could you say no? I mean, this is an opportunity of a lifetime, so I can never refuse the students when they’re determined. There’s no way I can say no,” Fernandez said.

Allen was accepted into all three universities. The decision was tough, but Allen believed the University of Oregon was the best fit her. She is now in her first year at Oregon working towards a Ph.D. in neuroscience.

Fernandez is amazed at Allen’s success and happy she was able to help.

“She’s one of those students that you see them blossom and you’re like, ‘Wow. I’ve been part of her journey,’” Fernandez said.

Allen is grateful she had Fernandez in her corner, someone who is dedicated in supporting students just like her.

“She was always the one who made it clear that she was there and more than happy to help, which was really beneficial in all different types of scenarios and times throughout my college career,” Allen said.

Earning a Ph.D. is Allen’s main focus right now. She isn’t exactly sure what she wants to do after she graduates from Oregon, but she is enjoying learning in the field she is passionate about. Allen credits MU and CASE for getting her to where she is now.

“I think Mizzou overall was definitely like a push in the right direction. One of their cornerstone values is discovery, which, this is a little bit cheesy, but I think it’s really representative of what I did,” she said.

Allen’s advice for anyone who feels like they are at a standstill is to never give up.

“All of those little setbacks shouldn’t necessarily be viewed as setbacks,” Allen said. “They’re just kind of like a change in the path, a fork in the way of ‘Okay, now where do I go next?’”