To “secure the bag” is a new phrase, but its meaning is anything but. “The bag”, is a goal, something you want to obtain or accomplish. To “secure the bag” is crossing that finish line or completing that goal. The National Society of Black Engineers (NSBE) is definitely securing that bag, on and off campus. NSBE, an organization built to establish a space of inclusion in the field of engineering, now grows and excels farther than the founders ever thought possible.

NSBE, founded by 6 individuals on the campus of Purdue University in 1967, is based on the principles of belonging, providing resources, and creating generations of culturally responsible individuals. NBSE provides an example of the work that every organization should aim for. To provide a place of belonging, a message to minority students that they are not alone, providing resources and support to equip students with the essential tools to succeed, and finally, creating individuals who know the value of what was given to them and will give back to the community to help later generations do the same.

Coming off a high from their many wins at this past 45th annual NSBE National Convention, held in Detroit, MI; saying that NSBE has succeeded is an understatement. Mizzou’s NSBE took 31 members and traveled to Detroit over Spring break to participate in numerous competitions and networking opportunities, including a career fair and leadership elections. With over 15,000 members in total at the convention, including professional alumni, collegiate, and elementary to high school chapters, the success could not be contained. Talking to Melissa Hollingshed, Mizzou chapter President, and Danae Nash, the Mizzou chapter Public Relations chair and recently named one of Region 5’s Public Relations chair, pride for the things NSBE has done and the excitement for the things to come was clearly heard. At the convention younger students were exposed to all that is possible for them in higher education; and with the help of alumni, recruiting and offering mentoring opportunities, the college students were exposed to everything possible after. 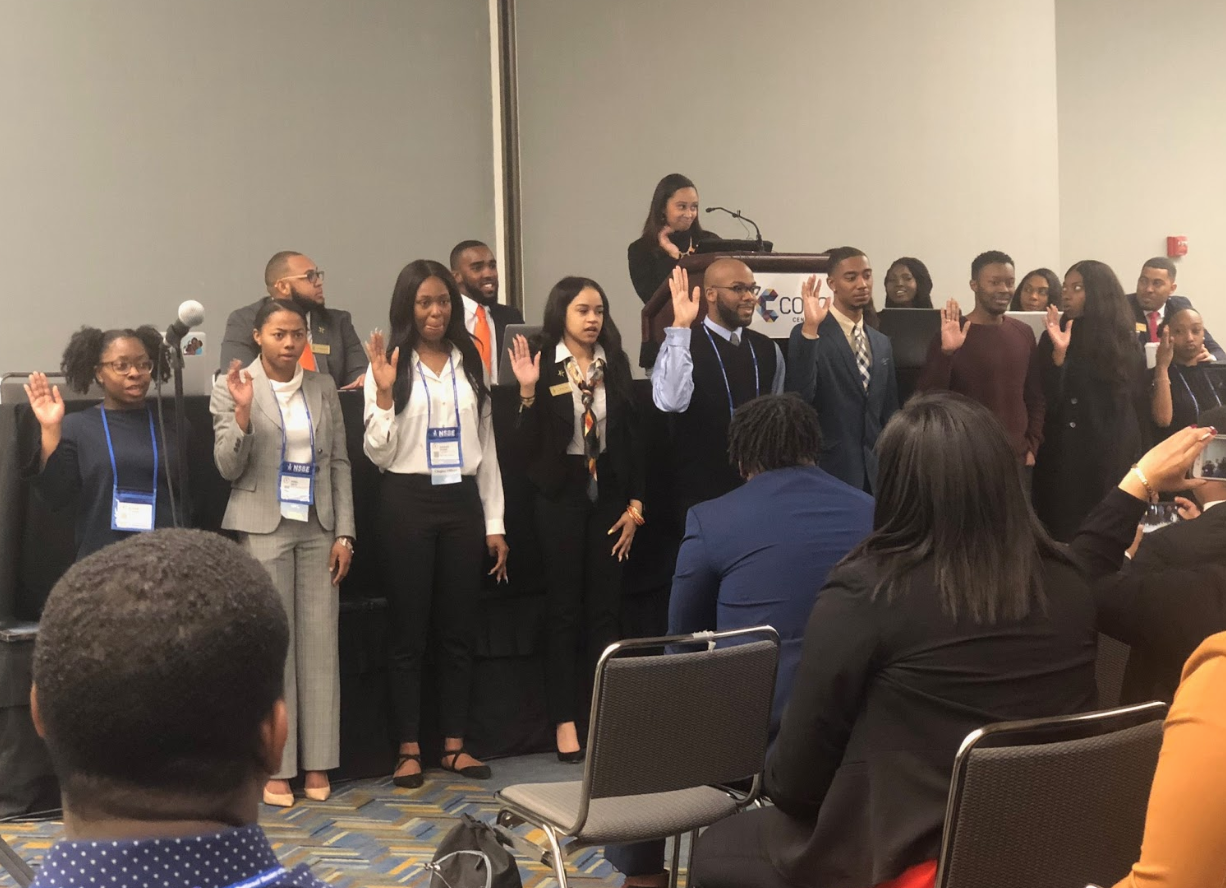 Members, Alexis Leonard (first to the left) and Danae Nash (fourth person down) elected to serve on the Region V board and getting sworn in.

Asking for help is not a weakness, but a strength in knowing you have the support you need to reach a milestone. Nash struggled during her early years at Mizzou; she batted struggles on and off campus. Not knowing what to do or where to go, a hand reached out to Nash to help pull her into the light. Dr. Trojan Rahhal, Assistant Dean for Inclusive Excellence and Strategic Initiatives, along with Amand Hardiman, Graduate Assistant for the Center for Academic Success and Excellence (CASE), and Ms. Devera Brock, CASE Student Services Coordinator, noticed that Nash was struggling and not only asked what was going on, but stuck with her and developed a strategic plan to return to where she was. The path was not easy, but with the resources and support given, it was possible. Nash said the things that she has been taught by Rahhal, Hardiman, and Brock are lessons that she is going to take with her the rest of her life.

Nash ended by saying, “So reach out because you are not alone in this and you are not a burden, you are a success plan waiting to happen”. NSBE is doing the same; reaching a hand out to pull students out of the dark, and push them into a brighter future.

NSBE has a dual product system that is clearly working: producing high achieving students on campus, and individuals ready to work and accomplish things in the world after. And of course, those who come back to NSBE to help the next generation do the same is what keeps the organization alive. Talking to Hollingshed and Nash was just a piece of NSBE; but their mission was clear: to “help [students] excel academically, and to succeed professionally.”