A 17-year-old Katelynn McIlwain sat in her high school English class in Freeport, Illinois — where the school mascot is a pretzel and the closest newspaper is 40 minutes away — listening to a National Public Radio story about postpartum death rates in Black women.

“It told the story of a black woman who died, and hearing that it was just so emotional,” McIlwain said of the experience that would ultimately change her academic trajectory.  “I was like, ‘This is journalism?’ I was used to it being only ‘news’ and 400-word stories about crime.” 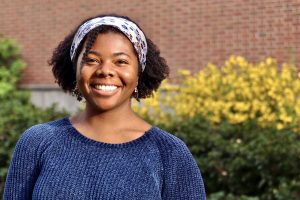 After a brief introduction to journalism in her English class, McIlwain was hooked. She was itching for the opportunity to produce her own stories. Rather than sit around and wait, McIlwain created her own opportunity.

“There wasn’t a high school newspaper for a while, but I was so excited that I actually rallied enough people to [help create a newspaper] class, my junior year of high school,” McIlwain said.

This was just the start for McIlwain. If anything, the determination McIlwain showed to revive the forgotten newspaper at her school would foreshadow her future successes. McIlwain’s pursuit of journalism didn’t stop with the school paper, she job shadowed at the closest newspaper. During this time, McIlwain was also preparing to apply and select a college. She now knew she wanted to study journalism.

“The executive editor graduated from Northwestern University, but he told me if you want to get a good journalism education, go to Mizzou, it’s not as expensive as Northwestern, and you’re going to get the same if not better education there,” McIlwain said.

In her senior year of high school, McIlwain and her mother made the nearly six-hour car drive from Freeport down to Columbia to check out MU in person.

“We made a trip down there, my senior year in high school, and I, of course, fell in love with it,” McIlwain said.

Initially, she was fixated on staying in-state to cut down the costs of college. Her parents made it clear they would support her decision to going to college, but she would have to pick up the bill.

“[My parents] told us upfront [college] was going to be our financial responsibility,” McIllwain said. “So, it meant in order to go to college, I needed to get scholarships, or do work-study or whatever, which was part of the reason why I thought I was going to just have to stay in-state, because going out of state you have out-of-state tuition.”

As McIlwain dug into figuring out how she would afford MU, she came across the multitude of merit-based scholarships MU offers. She found the Brooks Scholarship application and decided to apply. 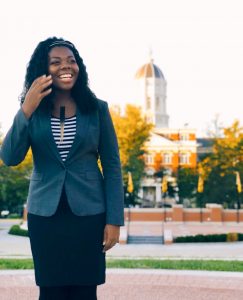 MU journalism student and Walter Williams Scholar Katelynn McIlwain is all smiles during her freshman year on MU’s campus in October 2018. (Photo/Instagram)

“I thought I had nothing to lose by trying, I am qualified by being a minority, I had a good GPA, pretty decent ACT score, so I applied because it gave that out-of-state tuition waiver and then more funds on top of that,” McIlwain said. “I applied and I was so elated when I found out I had an interview.”

Once again, McIlwain and her mother would make the nearly six-hour drive from Freeport to Columbia, this time in hopes of leaving with a scholarship. Following the interview process, McIlwain couldn’t picture herself anywhere other than MU. It had the journalism school she desired, and she found something more in the Center for Academic Success & Excellence (CASE).

“It was just such a fun experience,” McIlwain said. “I was honestly just so blown away by how much support CASE had for students of color. I have never seen anything like that before. Because I come from a small town, there’s just not a lot of programming like CASE, so it was so refreshing.”

Just a week or two later, McIlwain got a call from someone in the CASE office. She received the good news; she had been awarded the Brooks Scholarship. On top of that, McIlwain had earned other scholarships through her father’s work and other third parties.

Once at MU, McIlwain started pursuing her journalism degree. She is on the magazine track and is also minoring in digital storytelling.

“My dream job would be like, being able to be a full-time writer for a magazine, and specifically, writing reviews for music, television and film,” McIlwain said. “I specifically like to critique the amount of meaningful representation in our media.” 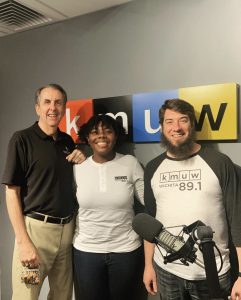 Thanks to one of life’s rare full-circle moments, McIlwain interned during summer 2021 for NPR at member station KMUW 89.1 in Wichita, Kansas, as a Korva Coleman Diversity in Journalism Intern — a 10-week paid internship that included room and board.

“The first NPR story that I’d ever listened to was specifically about the higher rate of black women dying after childbirth,” McIlwain said, who got emotional retelling the story.  “NPR introduced me to not only this medium but also to an issue that affects me as a black woman. From there, I was determined to tell more stories that can help other minorities, including myself. I’ve gotten the chance to do that.”

McIlwain couldn’t be happier with the hands-on experience she received at NPR. She pitched stories, covered events, interviewed the governor of Kansas and recorded radio voiceovers.

“I learned about the city through the work I did,” McIlwain said. “I like exploring new places, and this gave me the opportunity to do that.”

The internship helped McIlwain learn how to function in the fast-paced, 24-hour news environment. As a convergence journalism student, she hasn’t spent as much time in the newsroom as many other J-School students who write for the Missourian or work for KOMU.

“It was a bit of an adjustment,” McIlwain said. “I had to turn out multiple stories in a day. This means accuracy is even more important because I didn’t have as much time to fact-check. I had to be really sharp,

and that was good for me.”

McIlwain has always been driven to tell the stories of minority groups. Through TikTok, she discovered a local Vietnamese woman who combined her love of anime and hairstyling to create vivid, anime-themed looks for her clientele. 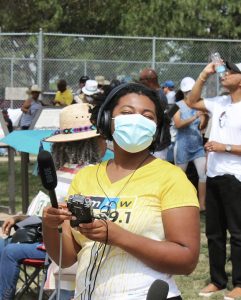 MU journalism student Katelynn McIlwain covers a homecoming celebration in Nicodemus, Kansas for KMUW as a Korva Coleman Diversity in Journalism Intern, during Summer 2021. Nicodemus is a Black-founded farming town. Every year descendants of the founders come together to celebrate.  (Photo/Instagram)

“I interviewed her, visited her salon, took pictures and had a really good interview with her client, too,” McIlwain said. “I got to talk to her about the nerdy things but then she also got to talk about her personal experience as a Vietnamese person.”

McIlwain was grateful for the opportunity to be mentored by NPR newscaster Korva Coleman, who helped her further sharpen her journalistic skills and prepare for a career after school. She has returned to MU to complete her senior year and graduate with her bachelor’s degree in May 2022. McIlwain also plans to complete the accelerated master’s program through the J-School.

“I’ve always been a good writer,” McIlwain said. “I used to think that to be a writer meant that I had to write fiction and be the next J.K. Rowling. But I was able to learn through nonfiction storytelling, high school and also by listening to moving stories on NPR, that beautiful stories can be told if they’re real, too. And there are plenty of real stories that deserve to be told in beautiful ways.”