For scholars who walk into the Center for Academic Success & Excellence (CASE), there is no denying the familial dynamic that makes the office a “home away from home” for so many. And in the family that is CASE, Devara Brock is “mom.” 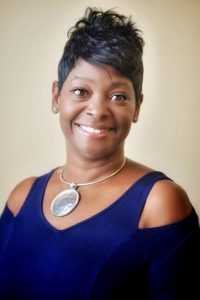 Devara Brock is a student service coordinator for CASE.

Brock, lovingly known as Ms. Brock to the students who rotate through her office, serves as one of CASE’s Student Service Coordinators. According to Brock, the job includes working with Diversity Award recipients. However, that only begins to scrape the surface of the work she does and the investment she puts into scholars.

“What do I do as a Student Service Coordinator?” Brock questioned with a chuckle. “I never know how to answer this question because I don’t only do what [my job description] says.”

Simply put, Brock does it all. For many, she serves as a counselor, advisor, life coach, crisis manager, cheerleader, friend and the list goes on.

“She helped me with school and I would come to her about my problems and she did nothing but encourage me and lift me up,” MU student Phajja Redwood said. “She was always there whenever I needed her…And she took care of me like I was her own kid and she has continued to do that since.”

But working for MU and CASE, were not originally what Brock envisioned for herself, not by a long shot. Prior to landing her role at CASE, Brock spent over 20 years in the Military. Her job? Fixing top secret equipment. It wasn’t until she was asked by a friend who ran CASE (formerly known as Academic Retention Services) to join the team that she decided to pivot in her career.

“[My friend] had been trying to get me to come [to CASE] and I’m like, ‘I’m good.’ I do a lot of ministry and so I travel a lot…speaking, preaching and teaching, so I didn’t want to be tied to a 9-5,” Brock explained. “[My friend] said ‘I know you’ll be great for these students’ so I told her I would do part-time and see how it goes because I was still a counselor as well.”

Part-time quickly turned into full-time, and six years later, the rest is history.

“At the end of the day it was nothing but God that led me to Mizzou,” Brock said. “I never thought in a million years that I would be working in higher education. My background is in counseling and education and I do a lot of work in the community with at risk youth and nonprofit organizations. So, I just think it was His plan and purpose for my life to be at Mizzou and CASE.”

With her experience in counseling, Brock says it affords her patience when working with students. She also understands, the most important part of her job is forging strong and meaningful relationships with scholars so she can help them realize their full potential.

“Sometimes at 17, 18, 19, those young adult years, [students] just don’t see what others can see,” Brock said. “And so, I see greatness in them and in order for me to go above and beyond, I have to build a trusting, respectful, mutual relationship with them.” 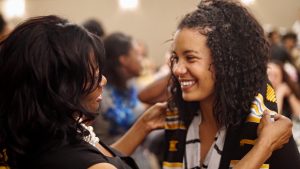 Outside of the support she provides academically, Brock also recognizes that classroom struggles are only a fraction of what scholars will endure while in college.

“It’s important that I create those bonds and invest so heavily in them so that when life gets difficult, when things happen beyond academics, they know that there’s someone [in the office] they can trust and can confide in,” Brock explained. “And it’s a safe place. I always tell [students], nothing is so bad that you can’t share it with me. We’re going to get through this.”

Davis first met Brock when he was a senior working in the CASE office. Brock helped him cope with the passing of his mother. She died when Davis was a sophomore and he never fully processed her death until he met Brock.

“Ms. Brock was one of the first people who took the time to invest in me in terms of really trying to help me deal with that traumatic experience,” Davis said. “I hadn’t had anybody pour into me that way, with the intention of helping me grow as an individual.

“She said, ‘You have all these goals for yourself and you want to accomplish all these things, but if you’re not taking care of yourself, you’re not gonna be able to do any of it,’” Davis recalled. “I didn’t really realize how true that was until I started talking to her and figuring myself out and figuring out my plans for the future. I’m really grateful to have met her. She’s definitely [been] like a mom away from home. I call her mom all the time. She’s definitely been a blessing.”

Brock’s relationship with Davis is an example of her holistic approach to working with scholars.

“Academics is not my only concern,” Brock said. “I think that your mental and emotional states should be intact before we can even address academic scholarships, career fairs, etc. I deal with a person holistically. I don’t care if you have a 7.8 GPA at 80 credit hours. If your mental isn’t stable, isn’t in a healthy place, then that 7.8 GPA isn’t gonna mean a hill of beans.”

Brock’s desire to care for and uplift students in every context of life is indicative of the attitudes and lessons learned during her time in the military.

“In the military we are a family. You pull out the best in everyone,” Brock said. “So that’s what I do in CASE. You see the potential and you pull it out, you help bring it to life, and you stick together. You never give up on anybody.”

Although Brock provides kindness and support, she doesn’t shy away from tough love. She makes sure to instill discipline, accountability and responsibility in the students she works with. This duality of Brock is something Redwood experienced frequently. Redwood spent a lot of time confiding in Brock when she was struggling academically. Brock would allow Redwood space to cry, but would also ask, “Are you actually putting in the work?” 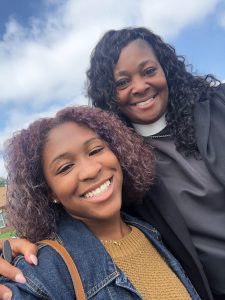 “Without her being so real and telling me what I should do, I would just think everything’s sweet and that’s not how it is in college,” Redwood said. “You really have to work for what you want. And she makes sure that you know that. She’s not going to baby you at all.”

For CASE Scholars, Brock helps to provide a constant presence in a time of life when things are ever changing.

“She’s so grounded that I think it makes the space that’s around her and the energy she provides something that is essential for students,” Davis said. “Because in a world that can be so inconsistent and in a space and time in your life as an undergraduate student where things are consistently changing, having somebody who provides stability can mean the world to somebody. It means the world to me.”

And for Brock, the work she does with students helps pull them out of college’s trenches and propel them towards victory.

“With failures, disappointments and the choices [students] make, you never give up. You always stick with them and encourage them,” Brock said. “You stick with them through their hard times [and] through good times. You just don’t leave them. I got that from the military. We’re on this battlefield, we can’t leave you. Your life is in my hands, so that’s why I’m so protective when it comes to my students.”