Students praise Justin Light for his unwavering commitment to them.

“He’s ready to drop everything for anyone.”

“Whenever I’m anxious, worried, sick, he’s the one that I call.”

Light has been a student service coordinator at the Center for Academic Success & Excellence since 2015. An alumnus of Mizzou, he is dedicated to helping students realize their full potential and work towards their goals.

“Ultimately, what makes my job really fulfilling for me are the achievements of my students,” Light explained. “I have a pretty firm belief that the next generation is better than mine and I’m excited to see the achievements that students have been able to create for themselves and what their future has in store for them.”

Connecting with students before they even step on Mizzou’s campus plays a key role in their growth. Light spearheads CASE’s Summer Bridge Program, formerly known as the Summer Transition Program (STP) which is a summer session built to bridge the gap from high school to college. Some consider it a student “cheat code” for success at Mizzou. 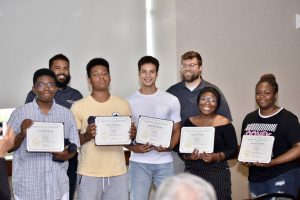 Justin Light with CASE scholars during the Summer Bridge Program.

Zairai Moore, a junior and current Summer Bridge student coordinator, met Light when she took part in the program as an incoming freshman.

“He would always give really good advice,” Moore said. “Transitioning into the school year, he became like an advisor, but more. He doesn’t just help me with my school life, he helps me with financial aid, my money-managing skills, my relationships, networking and stuff like that. He truly cares about his students.”

MU journalism student River Pich describes Light as approachable and genuine. It’s those characteristics that led to the two forming an instant bond.

“The first time I ever reached out to him was during STP and I threw up in Plaza,” Pich said. “It was my first time being sick away from home and he came and sat with me and took me back to my dorm and got me ice. He listened to me and how difficult it was to do things away from home. He didn’t judge.”

Pich and Light’s first interaction in 2018 was just the beginning of their student-mentor relationship. Both baseball fans, they ended up attending St. Louis Cardinals games together. 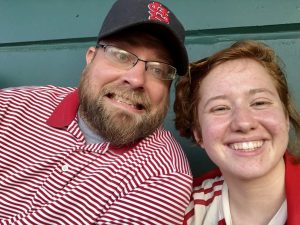 “The first game we went to was Pride Night at Busch Stadium,” Pich said. “I threw the first pitch because I was there as a representative of the Missouri Courage Scholarship. I asked Justin to come with me because I knew he loved the Cardinals too, and I wanted him to be there. It was a lot of fun, so we decided to make it a tradition.”

Unfortunately, their tradition is on hold for now, since fans aren’t allowed at MLB ballparks this season due to Covid-19. However, it’s interactions like these that are important to Light, as academic support is just a fraction of his job. Making sure his students feel supported emotionally and providing resources to keep their mental health on track is also a top priority.

Before the doors to the Student Success Center were shut due to COVID-19, Light’s office served as a revolving door for students.

“I had just gotten hired in February, so I was the newbie at CASE,” Fallon Smith-Christopher, Director of Marketing said. “My office was directly across from Justin’s and right away I was blown away by the number of students who dropped in and out of his office every day. Whether it was for a quick chat, academic guidance or to help put out a fire, Justin made sure he was there for his students.” 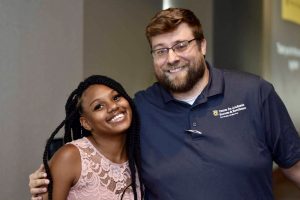 Light’s past experience as an advisor for elementary-age students made him appreciate being able to watch his mentees grow and flourish throughout their lives. He enjoys witnessing the evolution of college students that he works with.

“Having students get to the place where they can work on who they want to be is really neat,” Light said. “I feel like the second year of university is always the most challenging year that students face. Getting to help River and Zairai take those challenges head-on was really good.”

From helping students move when they switch apartments to sending motivational texts throughout the week to those who need them, Light is known to students on campus for going above and beyond.

“I appreciate Justin because he doesn’t judge,” Pich said. “He’s reframed my ideas of a support system. Whenever I’m anxious or sick, he’s the one that I call. He’s just a great guy: one of those people that gives you a lot of hope. Justin’s one of the reasons why I continue to stay at Mizzou because he helps me know that there are people in the system going to bat for me.”

One student’s success story that embodies what Light and the CASE off is all about is the journey of 2020 MU graduate Ashana Starr. Starr was a CASE scholar who essentially got kicked out of Mizzou, worked her way back to the university and graduated with a degree in Psychology. She currently works as a Mental Health Technician at CenterPointe Hospital in Columbia and is also in graduate school. She leaned on Light and the CASE office through it all.

“The whole getting kicked out of Mizzou situation was very tough, but [Justin and Ms. Brock and the other advisors] were there with me, shed some tears with me, helped me get through it and when I came back they were even more of a bigger support system. They were on my tail to make sure I stayed here and graduated,” Starr said. 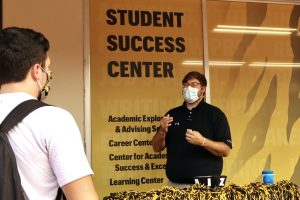 Justin Light speaking with a Brooks scholar in front of the Student Success Center during CASE’s welcome event.

“I think that the level of resiliency and determination Ashana showed to get to her professional goal is something that’s really inspiring,” Light said. “Your journey doesn’t stop even if you have roadblocks. You can still find a lot of success even if your original plans change.”

As Light continues to devote his time to serve students in any way that he can, his ultimate goal for them, doesn’t include him.

“I think my hope is that I find a way to not be needed anymore,” Light said. “My hope is that I can create students that are really able to critically think about their world and come up with unique solutions to problems that may arise. They may not need me anymore, and I think that is a really good thing as they start to take on their own world.”