It may seem for senior and interdisciplinary studies major Kevion Frank, that all of her goals and achievements have been mapped out and planned to the smallest detail; however, her decision to attend MU was completely unexpected.

“Mizzou was not the goal,” Frank said. “I wanted to go to K-State for their business program for accounting.” 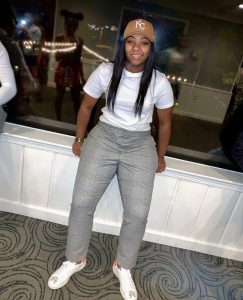 The week before fall classes started in 2018, Frank found herself in her dorm at Kansas State browsing social media and seeing posts from her friends at Mizzou and feeling as if she made a mistake. She called a friend before contacting officials at the MU business school. Frank got the green light to transfer that Friday and moved into her dorm at College Avenue by Saturday night.

“That’s pretty much how it came [about],” Frank said. “I never wanted to go here but it turned out to be one of the best decisions I made, honestly.”

One could say it was Frank’s perseverance that resulted in her successful transfer to Mizzou just days before the start of classes. CASE student service coordinator Devara Brock witnessed this resolve in Frank upon meeting her at a KC Scholars event.

“She appeared to have a kind spirit and in the midst of being humble and that kind spirit, there was a determination and that determination, in my opinion, was to complete whatever the task was,” Brock said.

Frank’s current task is graduating and doing so in December. For those who know Frank, her accelerated college career come as no surprise.

“If you look at it, she started in the fall of 2018, she’s actually finishing up in two years, so that’s part of the growth and the maturity and the persistence,” CASE student service coordinator Ana-Maria Fernadez said. “She knows what she wants to do and then she’s determined to get it done in a shorter amount of time.” 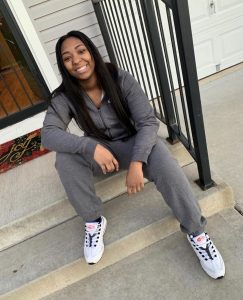 As a student in the KC Scholars program, Frank is part of a select group of students from the Kansas City area who have been awarded scholarships for their high academic achievements and community service efforts. Founded in 2016, KC Scholars is an organization aimed to support postsecondary education. In 2018, the program was established at Mizzou, making Frank part of the inaugural class. In December, she will become the very first KC scholar to graduate from MU.

This path for Frank began her sophomore year of high school with the Early College Academy which allowed her to attend community college during her junior and senior years. Her counselor at the community college pushed her and her peers to apply for KC Scholars. When Frank was selected for the program, it was a realization borne from her upbringing and experiences.

Growing up, her family emphasized the importance of learning and obtaining an education. Frank’s mother, a social worker, also instilled in Frank and her siblings the value of serving one’s community. In fact, Frank’s mother reminded her of their expectations for her on a daily basis.

“Every single morning when I walked out the door, she would be like, ‘Make sure you make your family proud today,’” Frank recalled. 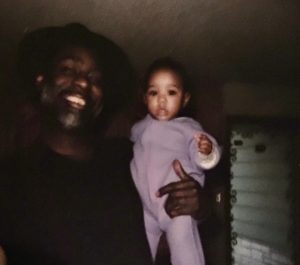 MU Senior and KC Scholar Kevion Frank in her father’s arms when she was a baby.

Frank’s father passed away when she was a little girl. After his death, her uncle and grandfather became the father figures in her life. Then in 2012 her family received another devastating blow; her uncle was murdered and her life would be forever changed. From there, Frank’s consideration of education and fulfilling her family’s hopes deepened.

“I think that’s when I started thinking, ‘this is serious. I need to take [education] seriously. Everybody wants me to do good. At this point there’s really no reason for me not to,’” Frank said.

Frank attended Penn Valley Community College her junior and senior years of high school to be closer to her grandfather. She wanted to be able to spend time with him and take him to his senior activities, so she arranged her schedule around his.

“Pretty much everything I did was for him,” Frank remembered.

Just two months shy of her high school graduation, Frank’s grandfather passed away. The grief over his death made the beginning of her first year at Mizzou particularly difficult and led to academic challenges nearly costing Frank her scholarship. 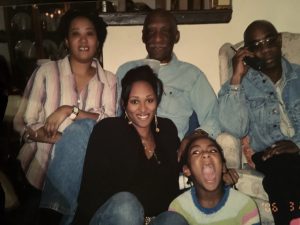 A young Kevion Frank goofing around with her mom, sister, grandfather and uncle in 2006.

“I had just lost my grandpa, and I was really beat up about that. I just couldn’t believe it. I literally had zero motivation. I couldn’t figure out what I was doing this for anymore,” Frank said.

Frank would find the strength to push forward. She credits her past cohort coordinator, Mrs. brock, for reigniting the fire in her and providing assistance for her appeal to KC Scholars.

“Ms. Brock was the one that played the middleman, so she could vouch for me to tell [KC Scholars] that I really wanted to stay in school,” Frank said.

Her current cohort coordinator, Ana-María Fernandez, has also helped Frank in ensuring her completion of her online courses to graduate in the midst of the pandemic.

After graduation, Frank plans to continue her work as a before and after school care supervisor at Harmony Elementary School, with long-term plans for the future, including earning a master’s degree. 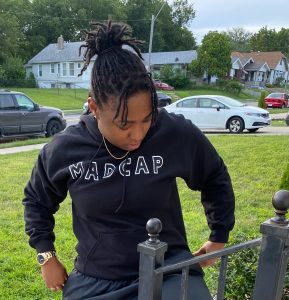 Frank, is also a young entrepreneur. She’s the CEO of Madcap Millenials, a clothing brand she launched to reverse the negative views of youth and to influence change within the community through the arts. Frank has plans of expanding her business, culminating in her opening a youth development center with the same name. Through the center she hopes to expose youth to the arts and encourage them to embrace their unique qualities.

For now, graduating is the most immediate milestone and Frank is on the brink of carrying out her family’s lifelong wish.

“I haven’t thought about graduating that much anyway, as a big deal, so I’m literally just happy to graduate because I’m the first in my family to graduate,” Frank said. “I guess being the first KC scholar, that’s actually a big deal. I don’t know. I haven’t really thought about it, but I’m proud, I’m happy. I’m happy to do it and I am really proud of myself, honestly. So I don’t know how to feel. I’m just happy.”

For those close to Frank, it has been rewarding to watch her grow and flourish throughout her time at MU. They are certain she is prepared to begin the next chapter of her life.

“I’ve seen her in the few years transform and come out of the cocoon, blossom into a wonderful butterfly,” Brock said. It’s like she has her wings now and she’s ready to soar even higher.”