It’s early in the morning and Christian Ricketts is leaving the Mizzou recreation center. On the 15-minute walk back to his apartment, a fellow student yells, “Hey! Are you on the football team?”

It’s a question Ricketts gets asked often. At 6 feet 2 inches tall and 220 pounds, he doesn’t fault the assumptions. However, the MU junior is not a football player or a Mizzou athlete, but he has developed into a well-known athletic figure on MU’s campus. 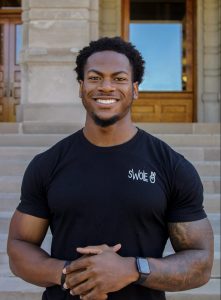 In the fall of 2020, Ricketts created a fitness business known as SwoleRicketts. A name fitting for his stature.

“I really didn’t have anybody that I could look at for tips and advice and things like that, so I kind of wanted to be that outlet for other people in fitness,” Ricketts said.

That “outlet” has reached over 85,000 people when you combine his Instagram and TikTok following.

Ricketts’ entrepreneurial spirit and ability to start an effective business while in college, can be a credit to his father. It’s who he gets his drive and motivation from. George Ricketts was born and raised in Jamaica. Growing up, he worked hard in school while maintaining multiple jobs on the side. However, he wanted a better life for himself. So, George took a leap of faith not many teenagers would do on their own. He decided to immigrate to America in 1977 at 16 years old.

Ricketts’ father settled in Kansas City, Missouri and immediately started to work numerous jobs. His plan was to save up enough money with the ambition of opening a Jamaican restaurant. In the midst of working, George was able to meet his future wife and Ricketts’ mom, Raquel.

Raquel also immigrated to the United States from Jamaica during her teenage years. George was able to woo Raquel while they were both teens and the couple have been inseparable ever since. The two worked together to get a restaurant off the ground and running.

After 17 years of laying the foundation, the doors of G’s Jamaican Quisine opened in April of 1994. Through hard work and perseverance, the restaurant has been a mainstay in Kansas City, going on 27 years.

“My father’s sacrifice and ability to grind to make our lives better changed the fortunes of our family,” Ricketts said.

The fortunes not only changed for Ricketts, but for his two older brothers as well. George Jr. is the oldest son and is software engineer for Cerner. Cerner has become one of the most prominent companies in the healthcare industry. Meanwhile, Michael Ricketts is a senior Gates Scholar at the University of North Carolina at Chapel Hill. The Gates Scholarship awards 300 students each year with a full ride scholarship to any school of the student’s choice.

The success of his older brothers was a direct result from the resolve and determination they witnessed from their father, which eventually trickled down to Ricketts,

It showed throughout his time at Center High School. Ricketts was determined to honor his fathers’ sacrifices by excelling in school and athletics.

“I enjoyed the process of striving towards excellence,” Ricketts said. “I finished in the top two of my class, became a drum major and was captain of the soccer team my junior and senior year.”

The consistency and effort Ricketts displayed during high school made him a perfect candidate for KC Scholars. Applying was a priority for Ricketts so he could lift the financial burden off his parents. During his junior year, Ricketts got the news he earned the KC Scholars Traditional Scholarship Award, which provides students 50,000 dollars towards their college education.

“Omg it was such a blessing to earn a scholarship that could change the rest of my life,” Ricketts said. “I feel like the scholarship I was able to gain from KC Scholars allowed me to put myself in the best position to be able to get a degree and stay financially free.”

Ricketts is going to graduate debt free because of KC Scholars and other scholarships that he was able to receive through Mizzou. With no financial stress, Ricketts hit the ground running before setting foot on MU’s campus.

The momentum continued for Ricketts when he was accepted into the Center for Academic Success & Excellence (CASE) Summer Bridge Program. The program provides incoming freshmen the opportunity to spend their summer taking six credit hours, while participating in various workshops to get them prepared for college.

“I feel that if I wasn’t a part of the program, I would not be in the position that I am in today,” Ricketts explained. “The Summer Bridge program allowed me to meet so many faces on campus, so many people that I might not have met on my own.

During the summer of 2019, Ricketts took full advantage of CASE’s summer program and never looked back. Ricketts received A’s in all three courses the bridge program offered. On top of that, he was able to build relationships with older peers and faculty members

“It kind of gave me a leg up in regard to the other freshmen since I was here before them,” Ricketts said.

Sticking to the values laid in place by his father, Ricketts excelled during his freshman year at Mizzou. He finished with a 4.0 GPA and played integral parts in organizations like Minority in Sports, Mizzou’s Black Men’s Initiative and the National Association of Black Accountants.

However, COVID-19 put a pause on Ricketts’ propulsion in the second semester of his freshman year. Mizzou students were forced to go back home because of the pandemic. The KC Scholar didn’t make any excuses to stop being productive during the pandemic, instead, he took advantage of the time away from campus and began developing his fitness brand.

“During quarantine I started a Snapchat story posting home workouts that people could do if they wanted to stay fit during the summer,” Ricketts said.

It didn’t take long for the Snapchat story to gain popularity which motivated Ricketts to expand on the idea.

“When I started posting workouts and everybody was asking me what I was doing in the gym, I just decided, you know, instead of telling every individual person what I’m doing, why don’t I just post it for everybody to be up there forever,” Ricketts said.

SwoleRicketts has now ballooned into a successful-monetized business. Ricketts started the Instagram page last September and has already reached over 4,400 followers. On TikTok, he has over 80,000 followers with over a million likes on the platform.

Ricketts has been able to monetize his business through TikTok and personal training. TikTok pays its creators per 1000 views. With his social media presence flourishing it’s no surprise his popularity is also growing among the MU student body. He’s turned followers into clients. He trains fellow students in the MizzouRec and at the Athletes Performance Institute. 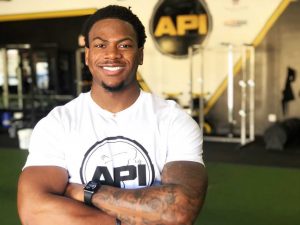 MU Junior Christian Rickets is hired as a personal trainer at API Project Fitness in Columbia, MO in February 2021. (Photo/API)

“The success that I’ve been able to generate is kind of mind blowing because I never thought it would come to that point,” Ricketts said. “The success to me is a product of the hard work that I’ve put in, being able to come from where I was to where I’m at now.”

The reason why Ricketts has experienced this amount of success early on is because of his consistency with the business. At 5:30 a.m. every morning, Ricketts is already at the MizzouRec working out or training a client. This gives the junior time to create content for his platforms and still have the rest of his day to focus on his academics or other business inquiries.

While Ricketts hopes to continue to grow SwoleRicketts, he is also in the process of creating his own clothing line, TheSwoleBrand.

“TheSwoleBrand and SwoleRicketts came from my friends saying that I am looking swole, so I just combined swole and Ricketts,” Ricketts said.

The rising junior credits CASE for helping him to get to this point.

“I feel like CASE just allowed me to be able to imprint my name on campus from an early state, and kind of grow from a low platform to rise above the rest,” Ricketts said.

The next step for Ricketts is to finish his academic commitments. He is double majoring in accounting and sports management with goals of working at a big four accounting firm once he graduates.

Despite wanting to pursue a career in accounting, there is still optimism for the longevity of SwoleRicketts.

“The way fitness is going, it seems like it could potentially be long term,” Ricketts said. “If it gets to that point, I’m not opposed to SwoleRicketts full-time.”

Over time, the questions towards the young entrepreneur have shifted from, “Hey! Are you on the football team?” to “Hey! Aren’t you SwoleRicketts?”

“Hundreds of people from across the country have constantly asked about the facility that I am working out in,” Ricketts said. “I just say the MizzouRec, the place that has forever changed my life.”