MU Senior Aminah Bradley-Pikes’ college journey began at the University of Missouri in the Fall of 1999. Yes, you read that right, 1999. Aminah was already taking laps around the storied columns and hanging out in the student center, all before ever taking a breath in this world. This is because she was inside her mother’s belly at the time. Aminah’s mother, Abena Bradley-Madkins, was pregnant while pursuing her bachelor’s degree in Education at Mizzou. 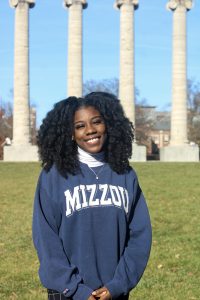 MU Senior and CASE Scholar Aminah Bradley-Pikes smiles for a photo near The Columns wearing her mother’s Mizzou sweatshirt in a full-circle moment on Thursday, Dec. 2, 2021. (Photo/Braiden Wade)

However, Bradley-Madkins put a pause on school to focus her energy on raising and providing for Aminah. Aminah jokes that her intellect blossomed because of the short time at Mizzou when she was a baby.

“I feel like one of the reasons why I have had academic success is because my mother had me in college,” Aminah joked.

After leaving school for a short time, her mother settled in St. Louis, Missouri. The culture and environment in St. Louis helped shape Aminah in her early and teenage years.

“I grew up around a lot of Black people, and a strong Black community,” Aminah said. “I really believe that has shaped me today and has inspired me to give back to those communities.”

The inspiration to give back to her community started to pay dividends at Hazelwood Central High School. Aminah knew if she wanted to make an impact in her city that it would start inside and outside the classroom.

“I was very involved in high school, and my life really was centered around academics and sports,” Aminah said.

Aminah finished high school with 4.0 GPA while being a member of the International Spanish Club and the school’s yearbook staff. She was also captain of her volleyball team and ran track in the spring seasons.

The St. Louis native’s work ethic landed her multiple scholarships to attend the University of Missouri, including the Diversity Award. Just like in high school, Aminah quickly started to look for opportunities for incoming freshmen.

An opportunity that came to the recent graduate was the Center for Academic Success & Excellence (CASE) Summer Bridge Program. The program provides incoming freshmen the chance to spend their summer taking six credit hours, while participating in various workshops to get them prepared for college.

“It was great to get early exposure to the campus and receive one-on-one experience with college professors,” Aminah said. “Summer Bridge made the campus very personable, versus having to experience the campus when there are a whole bunch of people.”

Aminah excelled in the program, earning A’s in both of the summer courses. The light was shining brighter with her impact outside of the classroom during that summer.

Justin Light, the former program director for Summer Bridge, immediately saw the potential in Aminah early in the program.

“Aminah could do anything, she had a great summer of being a friend to others and working hard to understand what we were trying to accomplish within the program,” Light said. 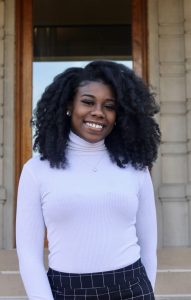 Although Summer Bridge was a breeze for Aminah, the transition to Mizzou was rocky at times for the CASE Diversity Scholar.

“Coming to Mizzou was definitely a culture shock,” Aminah said. “Not being able to see a lot of professors or being around a lot of Black students was an adjustment.”

Aminah credits CASE for helping her overcome the new realities of her environment. The relationship she cultivated with Light was instrumental in the early success Aminah accomplished.

“Justin saw things that I didn’t see in myself,” Aminah said. “I would come to him with issues and problems, and he would connect it back to who I am as a person and give guidance on how to navigate these new spaces.”

Aminah used the Summer Bridge Program as a springboard for even more success during her time at Mizzou. On the hunt for more opportunities, Aminah kept coming across flyers about the McNair Scholars Program during her sophomore year.

The McNair Scholars Program is a paid undergraduate research and graduate school preparation program that gets students ready for graduate study. Mizzou offers the Discover Program, which helps prepare students for the application process.

“The Discover Program is like a direct pipeline to the McNair Program,” Aminah said. “I really became involved with Discover and even became an ambassador for the program.”

Students are eligible to apply for the McNair Scholars Program once they enter their junior year. Aminah applied during her junior year but didn’t get accepted. It was one of the first times in Aminah’s life where she came up short in something academically related.

“At first it was like ‘wow,’” Aminah said. “It was definitely a blow, but I really treated it as a learning experience because I am going to go out for these things again, so this couldn’t stop me from pursuing the things that I want to do.”

Aminah has never stopped fighting for what she sets her sights on. Her resiliency is a trait she picked up from her mother. Bradley-Madkins left Mizzou after giving birth to Aminah, but she never gave up on getting her degree. 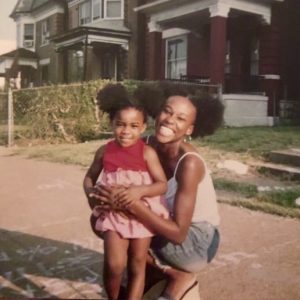 A young Aminah Bradley-Pikes takes a weekend trip with her mother to St. Louis, MO in 2003.

Years later she went back to Mizzou and earned her bachelor’s degree in Physical Education. The determination her mother showed, provided an example and blueprint on continuing to press forward when things aren’t easy.

“My mom going back to college showed me that you can really do anything that you want if you put your mind to it and don’t allow things to deter you,” Aminah said.

Aminah didn’t waste time sulking in not getting into the McNair Program. Instead, she went back to the drawing board to make herself an even better candidate for her senior application. She continued to meet with Brittany Fatoma, graduate assistant for the McNair Scholars Program, to find out ways to improve as an applicant. During her senior year, Aminah became an ambassador once again for the Discover Program.

“I went to Brittany’s office regularly and to have that one-on-one connection was really influential,” Aminah said. “She was one of the people who I reached out to, to see what I could differently.”

The commitment Aminah displayed in her second attempt did not go unnoticed.

“During the interview process I met with them, and they made it clear I was a top candidate,” Aminah said.

A year after being rejected, Aminah’s persistence paid off. She received an acceptance letter from the McNair Scholars Program. This was one of the most memorable experiences Aminah has had at Mizzou.

Now that Aminah is in the program, she is excited to be doing research she is passionate about. Aminah is researching the influence of gender roles and attitudes on the sexual behavior of young African American adults. She chose this area of focus because when she gets to graduate school, she is interested in studying how societal and environmental factors, such as gender norms, affect sexual behavior. 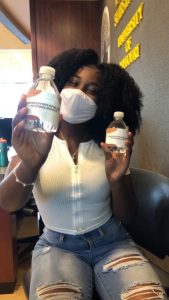 MU’s Association of Black Psychologists (ABPsi) President Aminah Bradley-Pikes holds up a water during a tabling event to raise awareness for mental health in the Black community during Fall 2021.

Also, Aminah is currently the President of Mizzou’s Association of Black Psychologists (ABPsi) which strives to promote and advance the profession of African Psychology by influencing and effecting social change. She’s helped spearhead several events including a tabling event held this Fall semester to raise awareness for mental health in the Black community.

The next step for Aminah is graduating in the Spring of 2022 with her bachelor’s degree in Psychology with a minor in Human Development & Family Science. After graduation, Aminah plans to earn her doctoral degree in psychology. She is currently applying to different doctoral programs across the country.

Her ultimate goal is to become a professor and teach Human Development and Family Science classes. Aminah’s career choice ties back to her true passion: to give back to the Black community.

“I really want to be a pipeline for Black students,” Aminah said. “You can’t know where you can go unless you see people who look like you in those upper-higher areas.”