“I still work for ESPN, just not in June.”

MU graduating senior and CASE Brooks Scholar Sania White-Hunt earned what she called her “golden ticket” to a career in sports broadcasting. Then she got the call, it was taken away.

Every year since 2003, The Empire and Sports Programming Network, or ESPN, has offered MU journalism students the opportunity to intern at their headquarters in Bristol, Connecticut. This internship is a journalist’s dream. It’s a paid production position to work and learn alongside some of the best talent in the business. They only select one student out of all who apply. This year, White, was that one student.

However, with COVID-19 spreading across America, it’s putting a hold on everyone’s lives. This spring, students were asked to move out of their dorms, concerts and events were postponed or canceled and overall, the public is being more cautious than ever before. For this reason, many summer internships have been canceled, White’s being one of them.

“I was devastated when I found out. I was sitting and doing homework and I got an email. And it was from someone who I hadn’t talked to before. She’s like, “Hey, can you let me know when you’re free so we can talk about your internship?” and I knew that that was the call that was going to tell me it was canceled,” White said. 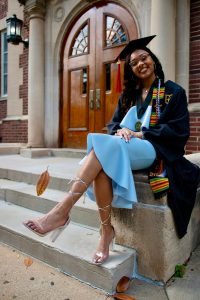 “I have a few things in the works. I actually worked on a sports podcast for a class, and it was the final project, but it’s looking like I’m going to turn it into an actual series… I have a family friend who has his own radio platform. So, we were talking today about producing a sports show as well on that platform where I kind of get to be a mediator at times, but also direct the conversation,” White said.

Having applied for the internship during her junior year and not receiving it, White went straight to work in hopes of securing her spot as a senior. In the summer of 2019, she began producing each show she anchored at KOMU. White was determined to grow her experience as a producer, and she did not stop until doing just that.

“I always told myself if I’m going to aim for something, I’d better shoot for the stars. So, the goal and motivation was anybody can get this internship, why not me? Also, I knew I needed a place when I graduated. The last thing I wanted to do was be sitting around for a year trying to figure out what I’m going to do,” White said.

That will to never back down is what CASE Student Service Coordinator Devara Brock, known as Ms. Brock to her students, saw in White throughout her four years at MU. As a Brooks scholar, White met Ms. Brock during her freshman year. The two built a relationship from what started with academic support and quickly blossomed into more. 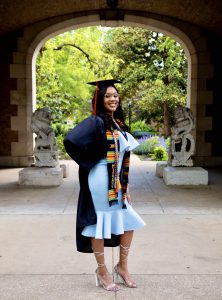 “She was always dedicated. She’s passionate about what she does. Certain things have happened throughout her four years at Mizzou. Different obstacles and trials and tribulations have come up. She’s been very resilient. And again, she just never stopped because that passion, that drive and that determination to accomplish a goal that she sets out. Whatever the goal is, she’s going to accomplish it,” Brock explained.

“It’s the path that she’s chosen. It’s one of her desires, and she’s humble enough. She’s very humble and grateful. So I think that she’ll get exactly what she desires in life,” Brock said.

White has a close relationship with everyone in the CASE office and refers to the department as her home away from home.

“They were incredibly instrumental in my success throughout college not just in academics, getting this internship, but as a person. They gave me the resources, the love, sometimes tough love, held me accountable, all of them were there,” White explained. “They truly made me feel like they cared and wanted to see me grow and be successful so I’m incredibly grateful for that, the people in the CASE office and appreciative to have that space and the support that I know I needed to become the person I am today.”

Assistant Vice Chancellor for Student Engagement & Success and CASE Director Donell Young, also met White when she was a freshman and was immediately impressed by her.

“It’s rare that a person comes in as she came in her freshman year really saying, “This is what I want to do. I want to get into sports. I really want to report on sports” … Each year she was doing something to position herself to get to her dream, so that’s powerful,” Young said.

White constantly built her resume and network during her time at Mizzou, and it paid off. 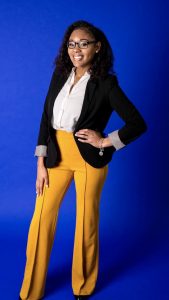 “When she told me that she was the one Mizzou student that was selected to have an internship at ESPN, I wasn’t surprised, but I was proud because that’s what she set out to do from our very early conversations, but to actually see her do it was just impressive,” Young said.

Growing up in Chicago, White (whose alias is Sania Blu for her professional work) always had a passion for sports. Her dream job would be to work for ESPN’s E:60 doing investigative reporting or anything that allows her to travel and continue meeting new people.

“I know no matter what shape or form it comes in, I just want to be able to tell people’s stories. I want to tell very human stories, ones that help you, and especially because I’m in sports, realize that there is a person behind all the chaos of the game,” White said.

White is the first woman at MU since 2007 to receive the ESPN internship and first ever woman of color to earn it. This means a great amount to her.

With this goal in mind, to be part of a generation that changes the sports industry’s landscape for the better, White continues to persevere. Even with the recent bumps in the road, she leans on the support from people around her as well as her faith.

“I think my family support has been top tier. Between that and also just having to take a step back and look and be like “Sania, this is not a failure.” The whole world is literally on hold. My dad is always saying, “it’s not about the situation, it’s how you view it and your perspective of it” so I’ve been putting things into a new perspective,” White said. 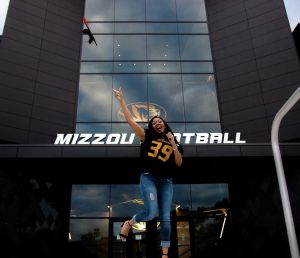 The ESPN internship may be canceled but it doesn’t take away from White’s accomplishments and what’s to come.

“I think one of the biggest things is knowing that this is your race, not anybody else’s. You don’t have to compare yourself to anyone else. You don’t have to look. Everything that you need to succeed is within yourself. You just have to really take the steps to achieve it, but you can’t do it alone.”