When you think of a typical family, what image comes to mind? Is it the traditional “nuclear family” which is a mother, a father and their one or more children? It’s been ingrained into society that this is what the perfect family looks like. Yet, this family structure does not apply to everyone.

In fact, according to the United States Census Bureau, in 2020 nearly 19 million children were living in single-parent homes. That’s 25 percent of all children in America. The majority of those single-parent families, approximately 75 percent, are headed by a mother only.

Not having both parents in your life can take a toll on your mental health and upbringing. However, there is always someone in the same boat, even someone willing to be a mentor and beacon of light for those struggling to come to terms with this. 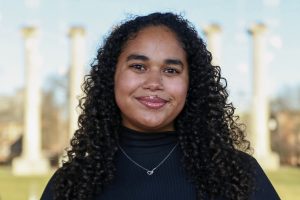 MU Senior Kismet Okyere poses for a photo near The Columns on MU’s campus in Dec. 2021. (Photo/Becca Newton)

This is where Kismet Okyere finds her calling.

The MU senior has lived most of her life with one parent. Her father is incarcerated and was sentenced to life in prison without the possibility of parole when Kismet was just five years old. Kismet’s mother was left to raise her and her older brother. Later she would gain a younger half-brother who is currently in high school. The two are very close.

Kismet first garnered interest in helping other youth while she was a member of the Boys and Girls Club in her hometown of Bartlesville, Oklahoma. This program was an invaluable resource for Kismet while she was in high school.

“They really focus on academic success, teaching kids how to be better citizens, stuff like that,” she said. “They have programs like ‘power hour’ where every day after school, you do homework for an hour and the staff helps you with it because a lot of those kids are low privileged kids who do not have that help, and so that was really helpful to me.”

Kismet is grateful that the Boys and Girls Club provided support where it was needed. Her mother was a very busy woman who worked tirelessly to provide for her children. Kismet understood the struggles her mother was going through.

“She comes home from working a job. The last thing she wants to really do is help a kid with their homework,” Kismet said.

Though she was always focused on academics and getting a 4.0 GPA in school, college was never on Kismet’s mind. If she did go to college, she planned to go to community college. That was until the most unexpected, yet welcoming surprise occurred during her last two years of high school.

“I was made the Youth of the Year for my town for the Boys and Girls Club, which earned me some scholarship money. Then I went from town to state competition. I won state and then I went to regionals, and at regionals I won $45,000 in scholarships,” Kismet joyfully explained. 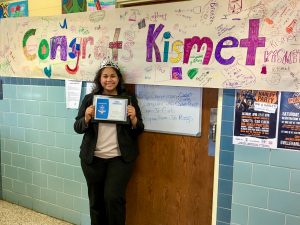 CASE Scholar Kismet Okyere holds up her Youth of the Year Award at the Boys and Girls Club of Bartlesville, Okla. in 2017.

Not only did she win regionals for a speech she gave her junior year, but she won again as a senior. Yes, another $45,000 in scholarship money was awarded to her. This would be Kismet’s ticket to attend a four-year university.

“It turned out I got a full ride to anywhere I wanted to go,” she said.

Kismet earned every penny of that scholarship money. Her mother, Michelle Hightower, is immensely proud of her daughter and how she handled herself in front of so many people as she delivered a speech on how the Boys and Girls Club changed her life.

“It was a big deal. I mean, she gave her speech in front of 1,500 people when she was a junior in high school. It was such a huge, huge deal not only to be there, but for her to not have to worry about [tuition] or work,” Hightower said.

To top it all off, Kismet received the Diversity Award from MU. A scholarship managed by the Center for Academic Success & Excellence. This award waves non-resident fees for out-of-state students like Kismet, which has saved her between 15-20 thousand dollars per year. 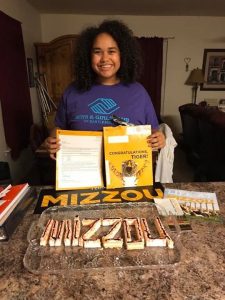 McNair Scholar Kismet Okyere is all smiles when she finds out she got accepted into MU during her senior year of high school.

Mizzou was the place Kismet wanted to be.

“I chose Mizzou because of my high school psychology teacher. She is a Mizzou alumni and the reason I fell in love with psychology in the first place,” Kismet said. “Plus, they were offering the most in funding compared to the other schools I got accepted into.”

Without the financial burden of college, Kismet has been able to focus on academics and her career path. She is currently a senior at MU with a major in psychology and minors in sociology, social justice and criminal justice. She also has a certification in addiction studies and a multicultural certification.

“I’m really invested in the holistic view of criminal justice like how society impacts it, but also parental relationships, interpersonal relationships and just the person themself,” Kismet said.

Based on her experiences, Kismet is passionate about helping other youth who are in a similar situation as her. During the summer she volunteers as a mentor at New Day Camp in Oklahoma which is a camp for children who have a parent or parents incarcerated. According to their website “these children are the forgotten victims of crime and we help them experience a New Day.” Kismet attended this same camp as a camper until she started college.

Her involvement doesn’t stop there. Kismet is the president of ‘Desire to Inspire’ on campus. It is a mentoring organization that works with lower income girls in the Columbia Public Schools to learn more about womanhood, self-confidence and mental and physical health.

“As President, I’m always like ‘this is the hour of the week that the girls get to be themselves. They get to come in and not worry about their family, not worry about anything else,’” Kismet said. “I think everything I’ve done in the past has led me to work my organization like that.”

Kismet is also a Ronald E. McNair scholar. This is a prestigious program that prepares students for doctoral study. Kismet is working with a professor on research about adolescent-parent disclosure and how it impacts behavior, siblings and more.

“I wanted to look at how kids disclosing to their parents related to problem behavior,” she said. “So, you would figure the more you tell your parents, the less you’re likely to do or something like that. So, we’re kind of just looking at how that makes a difference.” 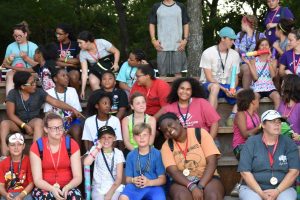 MU Senior Kismet Okyere sits with her campers at New Day Camp in Oklahoma in June 2019.

This project gives her a foundation for the research she wants to do regarding parent-child relationships and how being affected by the criminal justice system impacts juveniles.

“We’re kind of just looking at that association and how it impacts gender, or if you’re the first or second born, or if your family’s intact or not intact. So that’s what I’m really interested in,” Kismet said. “I feel like learning this is going to help me in grad school.”

Speaking of graduate school, Kismet is applying to graduate programs across the country. Her top choices are University of California-Irvine, Duke University, Arizona State, Rutgers and Michigan State.

Her Diversity Award has allowed Kismet to use that money for her undergraduate degree and save most of her other scholarship money for the next four years.

After she completes graduate school, she wants to impact change when it comes to the criminal justice system and the children that have been impacted by it.

“My main thing that I think I want to do now is policy reform, either through juvenile offender policy or prison policy with visitations with their children and stuff like that. I know I want to do some kind of reformed mix of policy,” Kismet said. “At the same time, I know I’m going to just keep researching this, being able to actually do research and getting it to the people who are writing laws.”

Kismet’s main inspiration to persevere has been her family, especially her younger brother. She wants to set an example for him so that he doesn’t go down the wrong path.

“We’re often told when you have a parent in prison you have three times more of a chance of following in their footsteps to prison, and so I think that’s one thing that’s always motivated me is I’m not going to be a statistic,” Kismet said. 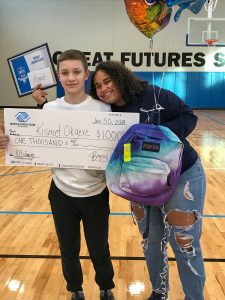 Kismet and her younger pose for a photo holding up a check after Kismet wins Youth of the Year at her local Boys and Girls Club in Bartlesville, Okla., June 30, 2018.

Since she will be the first person in her family to complete college, she has been mentoring her younger brother. Passing all her knowledge and experience down to him, including how to fill out college applications.

Hightower is happy that her daughter can help in areas where she cannot. It takes a large weight off her shoulders.

“It means a lot to me. I didn’t go to college so there’s a lot of things that she does to help him homework-wise and stuff like that, anything that I can’t do. It’s just a relief to have her,” Hightower said.

Hightower has witnessed firsthand how Kismet took on the responsibility of being a strong big sister since a young age.

“Ever since the time that she was thirteen, she had two jobs, and just has worked really hard to show him what comes from hard work. I kind of learn from her myself,” Kismet’s mother said. “I always tell her she’s paving the way for him.”

Though it is a lot of pressure, Kismet can handle it and is content on where she is now. On this journey, she has learned a lot about herself and her purpose in life; and she’s only just begun.

“I think for me is realizing there’s more to me than just home life. There’s more to me than social life. I am everything that encompasses me and not just one thing and I think that just took me a while to realize,” Kismet said. “I’m good overall. I don’t have to be good in every single area to be accepted.”