Those who know MU senior and Brooks Scholar Janelle Finch say “she’s always on go.” Whether she’s reporting for KOMU, serving as the president of the Epsilon Psi chapter of Delta Sigma Theta Sorority, Inc, or tending to her duties as vice president of National Association of Black Journalists, Finch is continuously working. For Finch, an involved college experience is normal. At the beginning of her college career, however, Finch’s experience looked a bit different. 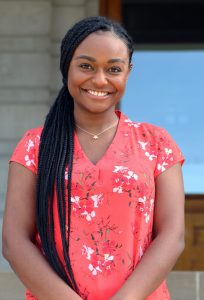 Originally from Naperville, Illinois, Finch had aspirations of being a fashion designer in high school. This plan soon changed when she decided a career in fashion wasn’t as promising as she initially hoped. She then pivoted to broadcast journalism.

“I was like, ‘Well, I guess the news anchors on TV have to go to school for something’ and I was already in the public speaking sphere,” Finch said. “I was on the speech team in high school, and I liked being on camera, so it just kind of ended up fitting with what my interests were outside of fashion design.”

Finch ultimately decided on Mizzou to major in broadcast journalism with an emphasis in radio, TV reporting and anchoring. Although she was pursuing a path she was passionate about, Finch’s first couple of years at MU were difficult.

“A lot of my friends went to different Illinois universities,” Finch said. “Out of all my friends, I was the only who made their way to Missouri. I didn’t really have a strong group of people coming into school and that’s not something I was used to in high school. I was a part of a bunch of different friend groups.”

Because of her lack of social ties to MU, Finch had a bleak outlook on the rest of her time on campus.

“It was a very lonely experience, my first couple months at Mizzou,” Finch said. “I was just ready to come to Missouri, get my degree and get out of here and move on to the next step. I didn’t really want to establish any relationships just because it was like, ‘Why would it be worth my time? No one here understands me and wants to be friends with me. I just want to come here for four years and get out.’”

That mindset would soon change when Finch found a support system at CASE. There is one staff member in particular who she leaned on when times were tough: Ms. Brock.

Brock, a student service coordinator for CASE, was Finch’s Brooks Scholarship cohort leader her sophomore year. Outside of the work she did with the cohort, Finch turned to Brock when she needed guidance or someone to talk to.

“There was one day when I went to go see Ms. Brock out the blue and I just sat in her office for a little bit and I just cried,” Finch said. “I was going through a really, really hard time where I thought I had people to support me and now those people are showing that they don’t support me. I didn’t really know where to go from there.”

Thanks to people like Brock and Finch’s internal determination to make something of herself and her Mizzou experience, Finch made it a point to get more involved.

“I started going to NABJ more, that’s when I became an RA to continue to push myself to establish roots and establish some connections,” Finch said. “I really wanted to be somebody who was a leader on campus.” 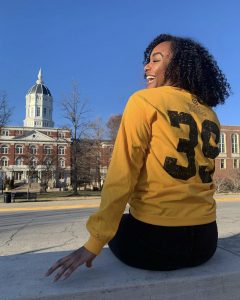 MU Senior Janelle Finch was named one of the recipients of Mizzou 39, which honors 39 seniors for their academic achievement, leadership and service to MU and the community.

Now a senior, Finch has established a place and name for herself on MU’s campus and journalism school. She’s even received recognition for it. In March, Finch was one of the recipients of Mizzou 39, which honors 39 seniors for their academic achievement, leadership and service to MU and the community. It was full-circle moment for Finch.

“It was an incredible honor and solidified that I’ve really grown a lot,” Finch said. “Mizzou has grown a lot with me and I’ve grown a lot with it. I’m really thankful for all the experiences that I’ve had, good and bad, because they’ve led me to here and it’s been a ride.”

As the end of the semester looms and graduating gets closer and closer, Finch, like most seniors, is feeling uncertain about what the future holds.

“It’s weird to think that this is literally the end,” Finch said. “Based on where I’m at right now, I don’t have plans for graduate school, so this is really kind of like the end, which is super scary, but also super exciting because I think I’m going to have a lot more possibilities with what I can do with my time.”

As of right now, Finch doesn’t have plans for after graduation. Last August, Finch began an internship with CNBC that recently ended in April. For a girl who is constantly on the “go,” Finch is hitting the brakes.

“Even though I don’t have anything lined up, I’m not too concerned with it because I know what I’m capable of, I know all the things that I’ve done, the kind of credibility I’ve established,” Finch said. “I’m just going take this break and ride it out and take this time between now and graduation, and maybe even a month after graduation to really figure out what exactly I want to do with my career.”