After four years of undergraduate schooling, many students are ready to leave academics behind and start their careers. Graduating senior DeMario Malone is up for a different challenge. Soon, Malone will be moving from Missouri to Pennsylvania to attend Temple University School of Medicine. 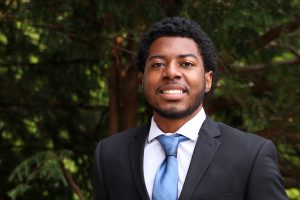 “It’s pretty much going to be undergrad all over again with four years and then there’s going to be another, anywhere between three to eight years of training,” Malone said.

Malone came to MU in the fall of 2017. While some students have distinct memories about the moment when they knew MU was the place for them, Malone made his choice solely based on finances.

“I do love Mizzou, don’t get me wrong, but it did come down to scholarships,” Malone said.

Malone is a Dr. Donald Suggs Scholarship recipient, an award given to only one student each year. He used this scholarship to help him reach for his dream of one day becoming a doctor. During his time at MU, Malone majored in Biological Sciences with a double minor in Black Studies and Psychology. Malone valued his time as a Suggs Scholar and all the resources and mentors that came along with being a scholar through the Center for Academic Success & Excellence (CASE).

He built a close relationship with former CASE Director, Donell Young. In early 2020, right before the pandemic halted life as we knew it, Malone and Young took a trip to St. Louis together for a fundraising event with Mizzou alumni.

“I was with Donell and a couple of friends and we all drove down there and it was just an amazing event, we heard amazing stories and it was an amazing time,” Malone said.

More than anything, Malone says he will miss the community and support he received from CASE.

“I used to talk to Mrs. Brock all the time but now because of Covid-19 I can’t see her,” Malone said. “I know that CASE has always been in my corner every step of the way. They’ve always given me amazing resources and amazing help and connections. I know I wouldn’t be the same person I am today without CASE.”

Malone was also a participant in the PAWS program through the MU School of Medicine. This program works to help underrepresented minorities have access to resources and help as they pursue a career in medicine. Malone is part of the first graduating class of PAWS.

“PAWS helped me in a lot of ways,” Malone said. “One of the biggest things is there’s a test to get into medical school called the MCAT and it’s a very hard test and it can be extremely expensive. What PAWS did, is they gave us a free course on the MCAT, and when I say a free course I mean they bought the course for us and this course cost $1,000. Them giving us this course for free was definitely a lifesaver.”

While Malone can now relish in his undergraduate success and continue chasing his dream of becoming a doctor, there was a point in time where he wasn’t sure if he would make it to graduation. In the spring of his sophomore year, Malone became suddenly ill and had to drop out of MU to focus on his health.

“At that point, people were telling me, ‘Oh well you can just take an extra year or just drop out of college and work for a while,’ but I decided to come back over the summer,” Malone said.

During the summer term, Malone completed nine credit hours while also working in a lab.

“It was extremely hard, but I made it through,” Malone said. “One thing that I would tell others is your college [experience] isn’t going to be perfect.”

Because of Malone’s dedication and perseverance throughout this challenging time, he is still able to graduate on time.

“There’s going to be obstacles, there’s going to be setbacks, and you know, that happens to everybody,” Malone said. “I said [my setback] isn’t by itself very special. What is special is the way you come back from those setbacks.”

Malone showed the Show-Me State, that a kid from St. Louis is special. As he gets ready to embark on this next chapter in his life, Malone can rest assured that everything he has learned during his time at MU, especially through CASE and PAWS, has equipped him to be successful.