Since her freshman year, MU senior and CASE Scholar Justine Durham has let her passions and goals guide her work and involvement. The experience she has gained as coordinator of the Diversity and Inclusion team at the MU Career Center, a former member of Women of Color, Honor and Ambition (WOCHA), TRIO and other programs, has sparked Durham’s desire to give back to the Mizzou community and beyond. 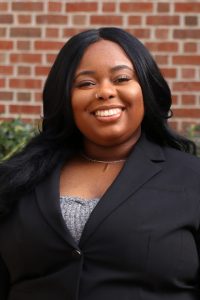 “In an ideal world, I would be able to one day open my own nonprofit career center in my hometown of St. Louis and give youth and adults who might not have access to these professional development and major career exploration resources a possibility to access them,” Durham said.

Durham began working at the Career Center at the start of her freshman year as a certified career specialist. She credits CASE for getting her foot in the door.

“I interviewed with the Career Center while I was in the [Summer Transition Program] and [CASE] made the time and space for me to go off and do that, to set off my year,” Durham recalled. “They really just set me on the right path.”

However, attending Mizzou was not a sure thing, even after that summer. Although Durham had chosen MU over several schools, her dreams were nearly crushed.

“I had done STP, gotten a job at the Career Center, picked my dorm. After all that I was informed that I didn’t have enough funds to cover my bill, so I informed CASE and [MU Counseling Center] that I would not be attending Mizzou,” Durham explained.

Then she received a phone call that would change everything.

“I was on my way to Lincoln University in Jefferson City,” Durham said. “As we’re on the road, Mizzou financial aid called and offered me a last-minute scholarship. So, as I’m in the car, on the phone with Mizzou financial aid, I’m yelling at my grandfather who was driving to ‘take this exit!” to go to Mizzou as opposed to Lincoln.”

During her time at MU, Durham cultivated multiple interests in Black Studies, Sociology and Human Development and Family Sciences (HDFS). With the recommendation of her academic advisor, she decided to take the less conventional path of studying all three within a multidisciplinary major. Durham is certain the knowledge she has obtained in these areas will prove useful in her desired career.

“Black Studies works because my hometown is predominantly people of color and then Sociology was helpful because I know what’s going on, but I didn’t know all of the systems in place that were making this happen and then [for] HDFS, I know family is a big thing as to the outcomes of people’s lives so I would want them to be involved too,” Durham explained. “That is how they all pair together.”

Durham’s diligence, dedication to her studies and community involvement has not gone unnoticed. This past winter she received the Flourish Initiative Scholarship from Veterans United Home Loans.

“That was a really good feeling that came when I needed it and they’re doing it again already and so I’m able to share the application with my friends and family,” Durham said.

With the scholarship came a unexpected opportunity. Durham will be interning in the Veterans United office in Columbia this summer.

“They took a special interest in my history and training and professional development such as reviewing resumes and preparing people for interviews. They offered me a summer internship assisting them with that in Human Resources this summer,” Durham said. “Fingers crossed I’ll love them, and they’ll love me and that will lead to a full-time job in the fall.”

Durham believes the support she has received from members of the CASE staff has been a catalyst for her success.

“Justin [Light] and Ms. Brock have been my on-campus aunt and uncle since the beginning. They’ve assisted me so much I couldn’t even list it all,” Durham said. “[Former CASE Director] Donell [Young] was actually my mentor for a time and provided a tremendous amount of good advice. They’ve just done so much. I don’t think I’ll ever be able to express the depth of my gratitude, but I do not believe I would have had the same level of success at Mizzou that I have had without them.”

Based on her own college experience, Durham has some words of wisdom for other students as they navigate their path to graduation.

“Mizzou is a big school and there are a lot of opportunities, but you have to go out and get them. They’re not always going to fall into your lap because that’s not how life works,” Durham said. “You really have to advocate for yourself, figure out what you want, get a good support team and then do what you have to do to go get it. Advocate for yourself and then find an opportunity and reach that opportunity because they usually lead to other opportunities.”

As graduation approaches, Durham feels a combination of anticipation, excitement and nerves. The thought of starting a new chapter in life is scary, but Durham is well prepared for this moment.

“I’ve been in school longer than anything else I’ve done in my life. 18 years out of my 21 years of life, I’ve been in school, and now I’m stepping out of my comfort zone, which is always a bit anxiety-inducing because it’s new. But I’m excited and expecting great things.”

There is no doubt great things are ahead for you Justine Durham! Congrats graduate, the entire CASE staff is extremely proud of you!