The American health care system can be a controversial and complex topic. For MU graduating senior Marissa Johnson, it’s the complexities of the system that caught her attention. 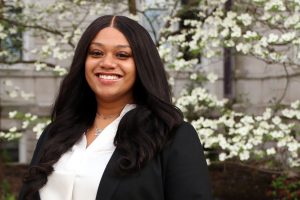 According to the National Academy of Sciences, statistics show major racial disparities for black and brown people not only in access to health care, but the quality of care they receive. The treatment of these marginalized groups sparked a desire within Johnson to pursue a career in the medical field.

Originally interested in nursing, Johnson had health issues during her freshman year. Her academics took a hit, but she got back on track during her second semester. However, this forced Johnson to change her major.

Now, the St. Louis native is majoring in Health Science with an emphasis in Health and Wellness as well as a minor in Human Development and Family Science. Johnson ran into some bumps in the road during her time at MU, but her family and friends have helped push her to keep going.

“They really are the reason that I’m doing this because I have a lot of goals for myself,” Johnson said.

These goals include beginning the graduate program for Healthcare Administration. Johnson will have to complete two years of work experience at MU. After that, she plans to complete her master’s in nursing so she can become a registered nurse. Her ultimate goal is to be a pediatric nurse practitioner and open her own practice for women and children.

“I feel like those are the people disproportionately affected by healthcare,” Johnson said. “Children are pretty well-advocated for but women, more specifically Black women, are very on the disproportionate side of things with healthcare so I basically just want to provide a center to make things easier.”

Johnson’s passion for helping others is evident through her involvement in several programs on campus. One of them being Jumpstart at Mizzou, a program which serves hundreds of at-risk children in the community. Since freshman year, she’s worked with children ages 3-5 years old by tutoring them and preparing them for Kindergarten.

“It’s allowed me to watch the kids grow. Seeing how they start, some not knowing how to spell their name, and at the end of the year they’re able to spell their name and tell me all of the letters in it,” Johnson said. “That’s been a really rewarding part of my college experience.”

Additionally, as a Freshman Johnson joined an organization at MU called “Finding Your Identity in Nursing” and was able to make her way up to become president. The organization is based around preparing its members for Nursing School and many of them have indeed gotten in.

This was Johnson’s plan as well, but it ended up changing.

“My initial goal was to get my bachelor’s in Health Science so I could do accelerated nursing and still pursue nursing, but my junior year is when I really got into administration because I didn’t really know if I wanted to have the clinical experience just yet,” Johnson said. “That’s a lot and it’s a lot of pressure.”

One of the members in her organization switching to the Sinclair Community College Nursing School’s Administrative Program is what inspired her to make the change. Not only this, but her experience with MU Healthcare also helped her want to pursue health administration.

“I really liked the way they were able to take care of me and help me with everything I was going through so I was like ‘I think that’s something that I would have a good time with’ especially since I’ve had more leadership experience in the past few years,” Johnson said.

As Johnson embarks on the next chapter in her life, she will never forget the support she received from the CASE office the moment she stepped on Mizzou’s campus as a Diversity Award scholar.

“CASE helped me a lot my freshman year to get settled into my role as a first-year college student,” Johnson said. “They showed me various resources around campus to help me succeed while also showing me various routes I could take professionally with my degree.”

Congrats graduate, the entire CASE staff is extremely proud of you! This is just the beginning.