On a rainy December day, the only thing on MU Sophomore Trinity McGlowen’s mind was meeting up with friends to study for an upcoming exam.

“I was leaving my dorm to go to The Grind Coffee House to study with a few of my friends and I was held up from going there because I was having car troubles,” Trinity said. “I was stressed out, my car was saying that the engine was hot and I was like, ‘I don’t know what this means.’ I’m looking everywhere, I’m praying about my car, and then I get a notification from my phone that’s sitting in the passenger seat.”

During a day that had already taken an unexpected turn, never did Trinity think she would receive an email that would change the trajectory of her college career and life.

“I look at the email and I see ‘Gilman.’ I was like, ‘Oh, they’re going to tell me I didn’t get it. Well, I tried,’” Trinity said. “Then I open it up and I see ‘Congratulations!’ I’m like, ‘Congratulations for who? Congratulations for applying? What do you mean?’ I’m reading through [the email] and I read all this stuff about them saying ‘you’ve been accepted, you’ve gotten the scholarship.’ There was a lot of stuff about the U.S. Embassy and I was like, ‘Oh my gosh, this is a big deal.’ So I was just sitting there in my car, like, ‘They’re serious.’ I’m in a state of shock and I thought ‘Let me just drive to The Grind and try to and figure this out.’”

The Benjamin A. Gilman International Scholarship was created to broaden the United States student population studying and interning abroad who might not otherwise have the financial means to do so. According to their website “the international experiences gained through participation in the program enable tomorrow’s leaders to thrive in the global economy and contribute to our nation’s prosperity.” 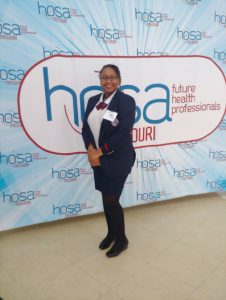 Out of the thousands of students nationwide who applied for this prestigious scholarship, approximately 900 recipients were chosen. One of those students was Trinity.

Trinity, who is a KC Scholar and part of the Honors College, first heard about the opportunity to apply for the Gilman Scholarship as a freshman during a KC Scholars cohort meeting. Although she had dreams to study abroad during her time at MU, it wasn’t until fall semester of her sophomore year that she decided to apply. After speaking with her counselor, as well as CASE student service coordinator and KC Scholars advisor Ana-Maria Fernandez, Trinity realized the only time she would be able to study abroad without disrupting her graduation plans was during summer 2021.

“I figured I might as well just shoot for it and whether I make it or I don’t, I tried. I don’t want to continue on in my life saying I did not try to study abroad,” Trinity said.

Once the application was submitted, all Trinity could do was anxiously wait.

“I was just worried that if I didn’t get the scholarship, then my dreams of studying abroad would be postponed or just never happen in college,” Trinity said.

When she received the acceptance email, Trinity was at a loss for words. By the time she made it to the coffee shop, she still hadn’t wrapped her mind around her new reality. It wasn’t until she told other people about the scholarship that she understood the magnitude of her newly earned opportunity.

“I just sat there with my supplies and my friends were like, ‘What’s going on?’ I told them, ‘Guys, I got an email about the Gilman Scholarship. I got it,’” Trinity explained. “And when I finally said it to other people, it really hit me that this scholarship that I’ve heard so much about, I got it.”

Under the program, Trinity will be studying abroad in Seoul, South Korea.

“I’m basically going to be a foreign exchange student,” Trinity said. “I’m going to be taking college credits and at the same time, I’m expected go out, explore, see the scenery, interact with the people of South Korea and get to know them.”

As a Gilman Scholarship recipient, Trinity had her choice of where she wanted to study abroad. She chose South Korea because of her longtime interest in the country and culture.

“A lot of what I’ve seen of the country comes from what I see on social media or movies, so I really look forward to being there in person, seeing it for myself and seeing what people of South Korea are like,” Trinity explained. “I’m also looking forward to the beautiful sights and learning the history behind the country and South Korean people.”

“I know there’s a lot of things that they’ve dealt with that is part of their history that [Americans] don’t know about. All we know about is K-Pop, [Oscar-winning film] Parasite and the Korean War. So, I’m really excited to know more about their history.” 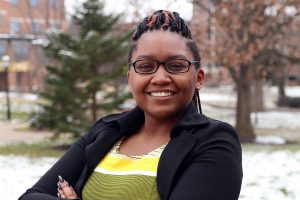 While Trinity was stunned when she received this prestigious award, Fernandez, her CASE student service coordinator, was not.

“I was very happy [when I found out she was a recipient], but not surprised because I knew she would get it. I had that sixth sense,” Fernandez said. “She’s a strong candidate and I knew she qualified for it. I was very, very happy for her.”

For Trinity, Fernandez’s kindness and support pushed her to take a chance and apply for the opportunity that will ultimately change her life.

“Ana has been really encouraging for me,” Trinity said. “There’s been a lot of times where I haven’t thought about certain opportunities as an option, but Ana’s really been my cheerleader and has helped me out with a lot of things. For the Gilman Scholarship, she always brought it up. She was like, ‘I know you can do it, Trinity. This is the opportunity for you to grab.’”

Trinity has been successful in most everything she goes after. As a first-generation college student, with a scholarship to MU, a nearly 4.0 GPA, Trinity is making her family proud. Now, she gets the chance to do something she’s never been afforded the opportunity to do, travel outside of the country for the first time in her life; thanks to the Gilman Scholarship.

“I’ve never really left Missouri, other than to go to Florida for a week,” Trinity said. “So, going to a different country is really scary, especially for me. I’m a homebody. My mom calls me a hermit because I like to stay in my room. So not only am I leaving my room, my house, my city, but I’m leaving the country.”

Despite some fears surrounding her trip to South Korea, Trinity believes the experience and exposure will change her in immeasurable ways.