As a sophomore, Jayson Donaldson had grown accustomed to campus life at Mizzou. Passing through the elegant silhouette of Memorial Union and walking by the sturdy limestone Columns became part of his daily routine. Donaldson, a psychology major, had been looking for his place on campus ever since he attended the Summer Bridge Program as an incoming freshman. He particularly found a certain level of comfort within the soft yellow walls of the CASE office, the Center for Academic Success & Excellence.

“I can go in and talk to anyone in the office. It made the adjustment to being on campus a lot easier, and it gave me a good sense of family and community on the campus. I don’t think I would have got elsewhere,” he stated.

Then came the COVID-19 pandemic.

As concerns of the virus grew, MU took preventative measures. On March 11, the university canceled classes for the remainder of that week. Students and staff were told classes would transition to virtual learning the following week. The campus grew even quieter in the weeks that followed.

Within two days of the initial announcement, the University of Missouri system had declared all courses would be held online for the remainder of the semester. After Boone County publicized its first confirmed case of the virus, MU began asking students with the ability to leave to do so. Despite the mass number of students exiting campus, Donaldson chose to stay in the dorms.

“The people I talk about my mental health and use as a mental health support system are up here,” Donaldson said. “That distance would exasperate everything because this has been my safe zone. This has been the place where I felt most comfortable, so taking me out of there and putting me back somewhere I don’t feel as comfortable wouldn’t be the best for my own mental health. That’s kind of a scary thought, but I just have to stay positive about it.”

Over the course of two years, Donaldson often found himself depending on the CASE staff for emotional and academic support. On March 18, his support system was challenged. The Student Success Center’s doors were forced to close for the remainder of the semester.

Donaldson could no longer stop by the CASE office to chat with Justin Light or grab coffee with Devara Brock, who serve as Student Service Coordinators for CASE. A chat or coffee break may seem trivial to some, but for Donaldson, it’s played a major role in maintaining positive mental health.

“I have Justin’s and Ms. Brock’s number if I just need someone to talk to,” he said. “It’s weird because I’ve always had them. It’s kind of the first time, it’s the school year and I don’t have them.”

Despite many obstacles the COVID-19 closures are causing, the CASE office is making the necessary adjustments to ensure students feel safe and supported. Although Donaldson prefers in-person conversations, he was quick to explain how much the advisors are committed to making the best of this unprecedented situation.

“Justin has done everything he possibly could to make sure that we all know that he’s out there and he’s willing to reach out to us. The difference is I would go in there to do homework, and, have someone to check in on you. It always feels good to have someone check in on you,” Donaldson said.

Light and the rest of the CASE staff have helped students cope with the stress caused by COVID-19, and each student’s needs are different. When Donaldson needed help preparing for quarantine, he was able to go to Light.

“It was a lot of talking, going to the store, getting a good amount of food that I can both cook and that I can just like easily eat and prepare,” Donaldson said.

Light went beyond making sure Donaldson was well equipped to get through the quarantine. He even suggested forms of self-care for Donaldson to consider.

“Justin helped me do a lot of things to get prepared beforehand, so that way when we were forced to quarantine and I wasn’t gonna have them in person that I would be okay. And I wouldn’t just like lose my mind,” Donaldson explained. “We were talking about how I could use cooking as an outlet to relax, calm down. I have art in my room that I can do. I have a lot of things to take my mind off of just being alone for a long time.”

CASE’s commitment to student success has helped students, like Donaldson, navigate the transition to online support. For students who didn’t have that connection with CASE before campus closed, the struggle to balance school and home life in the same space had a large impact on their transition.

Sophie Zell, a freshman journalism student and Brooks Scholar, moved out of the dorms and back to Texas just as Columbia issued a stay-at-home order.

Following spring break, Zell returned to an eerily quiet and empty campus to quickly pack up her dorm room and relocate. After filling up a storage unit and loading the family car, she and her father drove the nine hours back to Dallas. With each passing mile, Zell considered her unexpected shortened freshman year experience. 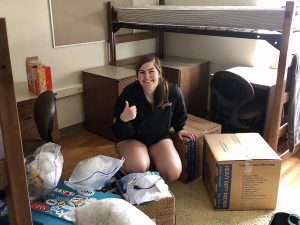 “I chose to go to a large public university, so I could have the experience of living in the dorm and being surrounded by a bunch of like-minded people,” she said. “Also, a diverse group of people that will hold me accountable in different ways….[The biggest challenge was] the loss of community that I had in Columbia, especially being from out of state. All my friends are pretty much in St. Louis and Kansas City, and I’m in Dallas, Texas.”

Zell quickly discovered how the sudden change of scenery is impacting her mental health.

“It’s honestly so easy when you’re stuck at home and you’re basically doing school in your bedroom,” she explained. “It’s really easy to struggle because the routine is boring and you don’t get the sense of adventure or spontaneity that you had in college. So it’s easy for depression to set in — for you to start to become anxious about a lot of things. It’s easy to see that start to creep in.”

As a Brooks Scholar, Zell interacted with the CASE staff prior to campus closing, yet she didn’t seek out the office as much as other students. However, as MU moved online, Zell found herself looking for support from CASE more often.

“For some reason, it just feels easier when everything I’m doing is online rather than having to take the time to walk all the way to the Student Success Center,” she stated. “In this time, all of the students are kind of scrambling to find ways to set us up for success, and I think that having the CASE office there makes us want to use it more. The biggest excuse for us is not knowing what tools were available to help us, and CASE does a really good job making it all available.”

Being able to offer students the resources they need in an unpredictable and chaotic time has helped some students become more aware of how CASE can help them in the future.

COVID-19 has presented many challenges for students and faculty. These obstacles are new to everyone, but having a department on campus that has handled the transition with grace and confidence has reassured students they are not alone and has given them a place to seek guidance. Whether it’s helping students prep or adjust to the “new normal,” the CASE staff has showcase the adaptability and supportive nature of the organization.