When I came to MU for the Center for Academic Success & Excellence’s (CASE) Summer Transition program (now known as Summer Bridge) in 2018, I was skeptical. I was unsure what my four years here would entail and anxious to know who I would meet that would impact my journey. A few weeks into my summer, I met CASE graduate assistant Amand Hardiman. 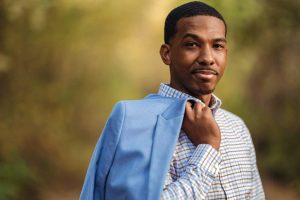 Former CASE graduate assistant Amand Hardiman poses for a photo as a founding member of the Graduate Students of Color Association (GSCA) at Utah State University.

Hardiman, a Columbia, Missouri native, radiated a kind, genuine energy and a smile that provided instantaneous comfort. When I introduced myself to him and detailed my aspirations as a journalist and writer, he was determined to help me seek out opportunities to grow in my craft. Shortly after the fall semester started, he reached out to me to be part of the CASE Marketing Team. This was the beginning of our mentor-mentee relationship.

To say entering college is a scary experience would be an understatement. Although the new-found freedom is empowering, facing the reality that in four years you should have an idea of what you want to do for the rest of your life is nauseating. Combine this with being in an unfamiliar place with unfamiliar people, it’s easy to feel lost. Mentors like Hardiman provide the comfort, encouragement and guidance necessary to be successful at a large institution like Mizzou.

Similar to many of the students he mentors, Hardiman experienced a learning curve when it came to navigating his undergraduate years at MU. As a first-generation college student, he didn’t know the ins and outs of college or where to look for resources to aid in his success. A conversation with his academic advisor at the time made it clear to him that obtaining his degree was imperative.

“I got into Mizzou through this probationary program that they no longer use,” Hardiman said, “but [my advisor] sat me down and said, ‘Based off these metrics, you’re not supposed to make it.’ He gave me a really honest conversation and I feel like that gave me a chip on my shoulder, but it also hurt at the same time. After that I was like, ‘I have to make it.’” 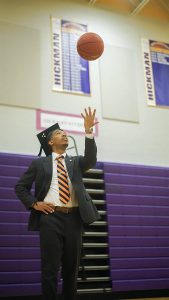 Amand Hardiman tosses a basketball in the air for a graduation photoshoot at Hickman High School where he served as the Hickman’s men’s basketball coach while working for CASE and earning his master’s degree from MU. (Photo/Tre Warfield)

Hardiman’s lack of guidance while at MU and his focus on other responsibilities impacted his performance and his graduation trajectory. He was supposed to graduate in 2014, and although he did walk across the stage, he didn’t officially obtain his degree until 2016.

“The experience navigating the reins of Mizzou was very difficult,” Hardiman said. “A lot more difficult than I thought. I didn’t know what I was doing. I didn’t know where to turn. I didn’t know a lot of the essentials that you need to know to be successful as an undergrad student. No one told me you’ve got to apply for FAFSA before certain date or else you don’t get Pell [Grant]. Three out of my four years I didn’t even get Pell because I didn’t understand that. It never registered.”

In order to complete his degree, he interned with Mizzou Athletics for his capstone. This experience is one that Hardiman says changed his life.

“Working for them really opened my eyes about the opportunities that I could give, not only to more Black students, but to campus life in general,” Hardiman said. “Working with student-athletes and listening to them share very similar experiences as me helped me recognize that I need to finish this degree because I can really help a lot of these students.”

After his internship with Mizzou Athletics wrapped up, Hardiman moved to Utah for two years to explore himself, his faith and life outside of Columbia. While there, he completed his final class to obtain his undergraduate degree and had the opportunity to work with Utah State’s Women’s Basketball team as a student assistant. He also did student affairs work and became the Assistant Director for Undergraduate Teaching Fellows.

Hardiman later wanted to pursue a Ph.D. and was interested in a program at Utah State. The application required that he take the GRE, which he didn’t want to do. It was during this time that he came across a graduate program in Educational and Policy Analysis (ELPA) at Mizzou and pursued it. When he came back to Columbia, his identities as a Black man and scholar were validated by the Black men he saw in higher education. 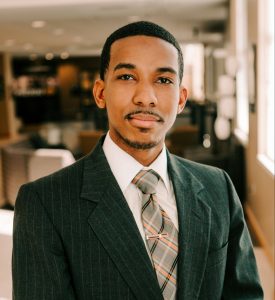 MU graduate Amand Hardiman smiles for a photo as part of the Williams Research Group at Mizzou led by Dr. Michael Steven Williams and Dr. Marjorie Dorime-Williams. Hardiman is still part of the research team as a guest researcher. (Photo/College of Education – Strategic Communications)

“My first class was with Dr. [Michael]Williams and to see a Black professor who looks like me, who holds the same identities as I do, sit in his chair, and be the teacher blew my mind because my whole time that I was at Mizzou, I never had a Black professor,” Hardiman said. “To see that was a blessing for me.”

While furthering his education, Hardiman had a strong desire to work with and mentor students of marginalized identities. Thanks to connections he had at MU prior to leaving for Utah, Hardiman connected with Farouk Aregbe, student support services manager for CASE, and got a job as a graduate assistant in the CASE office.

While at CASE, Hardiman worked with both CASE and Brooks Scholars, the latter of which holds special significance. Hardiman’s great-uncle is George C. Brooks, the namesake of the Brooks Scholarship. Although Hardiman didn’t get to know Brooks while he was alive, working with Brooks Scholars was empowering for him.

Hardiman gave students the guidance he lacked during his undergraduate years. Not only did he push his mentees to strive academically, but he also stressed the importance of taking care of themselves mentally and physically.

“My first semester was a really difficult time for me, and I began just saying I was existing, but Hardiman was the first person to actually question what that actually meant,” said Brooks Scholar Kelly Lopez. “He noticed when the group was exhausted. He cared about us as people and if he noticed that we were struggling he would cancel all plans so that we could talk to him, do homework, or get a well-deserved nap.”

As a dedicated mentor, Hardiman made it a point to connect with students by way of sharing his experiences.

“I feel like the more real I can be the more real it is for you all to recognize that, yes, I struggle with things just as well as you do,” Hardiman said. “And you can survive, you can make it in your own individual way.”

After completing his master’s, Hardiman eventually left Mizzou again in 2019 and headed back to Utah State to pursue his Ph.D. He is currently working in a Families in Sports lab studying the development of student-athletes and sense of belonging.

“I’m interested in understanding how the systems of higher education, administrators and policies, athletic directors, principals and high schools — how do they ultimately, influence the sense of belonging of student-athletes and how they ultimately influence their performance, whether it’s academic, or sport driven.” Hardiman said. 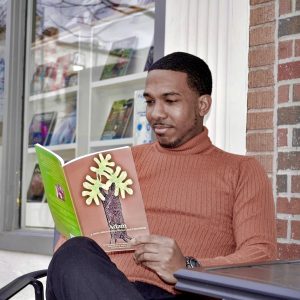 In addition to work he’s doing with his Ph.D., he recently co-authored and released a children’s book titled “Adam.” The book tackles large issues like racism and aims to be a conversation starter between children and adults.

The work Hardiman does is impactful, the imprint he’s left on CASE and Mizzou is undeniable. For Hardiman, the students he’s worked with have influenced him just as much.

“I think many of the environments we come from, we’re told often, ‘You can’t do that, or you shouldn’t do that,’” Hardiman said. “I love working with [Brooks and CASE Scholars], because you all helped me recognize that I can be Black, and I can be a nerd and that’s okay. That’s something that I gained from y’all, is that it’s okay to be a nerd, it’s okay to hold this identity and hold this cultural identity at the same time. You all inspired me as much as I inspired you.”