In addition to expressing gratitude for family, friends and community, take this Thanksgiving to learn more about Indigenous people and their history. Marketing intern Roshae Hemmings spoke with CASE scholar and Four Directions Vice President, River Pich (they/them; Chickasaw) about what Thanksgiving means to them and how non-Indigenous people can further educate themselves and become better allies. 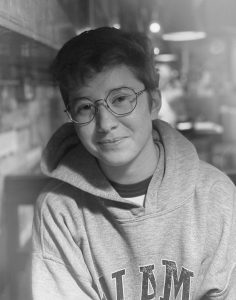 Q. What does Thanksgiving mean to you?

River Pich: As a family, Natives love to gather. We love to eat, so we gather, and we eat a lot. [laughs] I personally don’t know a Native family that doesn’t gather and eat. I feel like in [my] family, even though we have gone through a lot of generational trauma, it’s not about Thanksgiving anymore. It’s just about the family getting together.

Pich: I mean, when we gather, we don’t ever talk about the pilgrims. We cheerfully cheer the warriors in our tribe and then also the Wampanoag tribe that held their ground. But it’s never like, “Oh, Thanksgiving, that’s when the pilgrims and the Indians met and made peace.” There’s no illusion about what really happened, so that’s nice.

Pich: I think the entirety of how it [Thanksgiving] is taught is a misstep. The myth surrounding it is that it was peaceful, and it was fun when really it wasn’t. Very soon after [the first Thanksgiving dinner], there was a war that decimated the Wampanoag population. People survived, but not a lot. And not just them, but the Narragansetts and Nipmucs and a bunch of tribes in that area were displaced, [and] their numbers were decimated. The Wampanoag language was, they called it, “asleep” for a couple of hundred years and it was only relatively recently brought back and sort of stitched together. People are just now getting back into learning it verbally, which is a big deal and it’s worth celebrating, but I think the biggest misstep is that Thanksgiving was peaceful, because it was anything but peaceful.

Q. What do you think can be done to improve education?

Pich: That’s hard because you want it to be age-appropriate when you’re talking about things to children. [For example,] you can’t tell them all the ins and outs of the Holocaust. You can’t tell them all the ins and outs of the Trans-Atlantic Slave Trade and [casually say], “Here are some genocides that we’ve perpetrated.” Personally, I don’t think there’s any way around it. I think there are ways that you can go about adjusting your language and adjusting the context of what you’re saying so that it is age-appropriate, and you can [say], “You’ll learn more about that when you’re a little bit older.” [You can] talk about how there were things that weren’t fair and that weren’t good happening, without saying, “Here’s all the violence that ensued.” But I think that when it comes to teaching our own history, there’s no way around teaching the violence. You kind of have to. If you’re not talking about the violence, then you’re not really teaching the history.

Q. To follow up on that, when it comes to education, how do you strike that balance between having the history told accurately by Indigenous people, while also making sure the people who are giving the history lesson aren’t re-traumatized, burned out and don’t feel like they are the point person every time it’s time to talk about indigenous history?

Pich: Widely speaking with education, I think visibility-first education would be a great place to start. So, having more indigenous faculty, schools having contact and working relationships with the tribes that inhabited the land that the schools now sit on; that’s a great idea. For example, Missouri is largely Osage territory, and Ioway, and Missouria, and Sac and Fox; there’s a lot of tribes that aren’t recognized here. Imagine if high schools had a partnership with Osage nation and [students] got to be exposed to Osage artists and musicians and STEM majors or researchers and professors, and even a little bit of the language. You know, [like] how we have to say the Pledge of Allegiance and I went to Catholic grade school, so we had to say a prayer. Imagine if [students] also learned phrases in Osage and had to read books and learn more about the geography of the land from a more Indigenous perspective, which would involve less thinking of the land as an object and more as a living being that you have a relationship with and a responsibility towards. So, I think starting there would be great because you’re establishing that Native people are people and that we’re still here and we exist beyond trauma.

Too often, we think about marginalized folks and we’re like, “Okay, time to talk about violence,” but that’s not our existence. So, starting with the visibility. Then, when it comes down to what happened, you start to talk about [the bad stuff]. But then, I also think it’s important, especially for kids, to sandwich the bad stuff between what we’ve done already, what we’re doing and what we can do as individuals and as institutions, and there’s a lot. There’s a lot that we can do. But as far as talking about the trauma and who’s teaching it, there’s a lot of Indigenous-specific research [that’s been] done and published that white teachers and non-Indigenous teachers can look to for guidance. And coming back to [educating non-Indigenous populations at] Mizzou, specifically, it’s hard to find that balance between, “Okay, what can I handle? What can’t I handle? What am I willing to deal with today?” But I think that could be helped by having a wider web of resources for Indigenous people. Having mental health resources specific to Indigenous people and access to spiritual practices, [access to] community centers and better contact with tribes so that we can be surrounded by our community. Also, I think [Indigenous] people shouldn’t be put in a position where they feel like they have to say “yes” [to educating others]. At the same time, if we have white people in charge of the narrative, it’s going to be the white people-centric narratives [told] and our histories won’t be done justice. Someone’s got to do it, you know, as crappy as that is.

Q. What is important for non-Indigenous people to keep in mind and to remember when celebrating Thanksgiving?

Pich: Wow, so many thoughts…we’re people. Indigenous people are people. Be respectful. Put in the effort to use proper terminology. Don’t say, “Oh, yeah, well the Indians…” We can call ourselves “Indians,” but it’d be nice if you didn’t. Also, just take the time and responsibility of being aware of the historical context of Thanksgiving. And also, because I don’t like to be doom and gloom and it’s easy to get stuck in the trauma and the doom and gloom, look into things that you can do for the future. There are always good campaigns, like the campaign for missing and murdered Indigenous women. That’s a huge thing. There’s a lot of little things that you can do. Reading is great. Reading things by Indigenous authors. I think the gift that keeps on giving, that everyone has a responsibility to do, is to treat each other and treat the earth indigenously by treating everything as though it has a soul because it does. We’re not here to consume. We’re here to be with each other and to take care of each other and the earth. And largely we’re not doing that because it’s not our culture. Working towards humility and not thinking of yourself as number one and taking care of your community. I think those are things people can do easily and tangibly.

Q. Do you have any books, resources, authors, etc. that you’d like to recommend?

Pich: If you’re on social media, the first thing you can do is follow Indigenous authors and Indigenous scholars, there’s a lot. Native Twitter is real and the great thing about Native Twitter is that it’s not just North American, it’s international. And Indigenous people are also international, which is cool. I have some of my personal favorite books and resources. [A book] called Braiding Sweetgrass by Robin Wall Kimmerer. It’s a little bit of everything: it’s got Indigenous wisdoms, how to take care of plants, it’s partially a memoir. It’s very long, it’s very dense, but it’s very good and it feels good to read it. If you’re looking for a model of how to think a little more indigenously, I would definitely check that one out. If you’re looking for a podcast, my favorite podcast is called “All My Relations.” It’s hosted by Matika Wilbur and Adrienne Keene, who are Swinomish and Tulalip, and Cherokee, [respectively]. They talk about everything; they talk about queer indigeneity, food sovereignty and they even talk about voting. They talk about a lot of things that really bring together history and the present and what we can do as Indigenous people and what non-Indigenous people can do. It’s a great insight into what life is like and what some of the struggles are like for modern-day Indigenous people. And that’s another thing: Indigenous people are modern. We’re not all dead and we don’t all live in the past and we also don’t all wear headdresses and we also don’t all have dreamcatchers. That’s only the Ojibwe people and the people they traded with. We’re not a monolith. We are many, many hundreds of cultures and languages. No minority group is a monolith, and they should be treated as if they’re not.

Q. Is there anything else that you want to add? Anything that you haven’t said already?

Pich: Yes! When talking about Indigenous issues, I think one of the most important things is to make sure that part of understanding Indigenous people aren’t a monolith, is understanding that Indigenous people can have other identities that intersect with their Indigenous identity. Whether that be being part of the LGBT community, or being part of another ethnic minority, it’s important to recognize that. I say that to say, and it should be said more often, Black Natives are not treated the same [within Indigenous spaces]. They tend to have their identities questioned a lot more. In some tribes, they’re not offered citizenship, even though they’re Native and that goes back a long, long way. But when talking about Native American stuff, you always have to talk about the intersection of other identities and being Native American and how it makes it harder for those people and how we still have a long way to go as a country and with decolonizing our mindsets as tribes. Not every tribe is the same. They’re vastly different and not every tribe treats everyone the same. That’s kind of a harsh truth. Sometimes you’d think because we’re all minority groups, we all stick together, right? Well, sometimes we do not. And that’s messed up.