In order to promote the creation of new and innovative programs to increase student success at MU, Vice Provost for Undergraduate Studies Jim Spain brought “Shark Tank” to Mizzou. 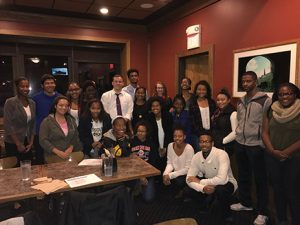 After receiving Shark Tank funding, the Undergraduate Success program welcomed its first participants in the fall of 2016.

Modeled after the television show that offers contestants a chance to convince a group of investors to finance a concept or idea, Spain’s version involved the Undergraduate Studies programs within the undergraduate portfolio, with directors working collaboratively to present new and innovative programs a panel.

“We wanted creative, new ideas that addressed student success,” Spain says. “It was required that the pitches be a collaborative effort across the programs. We know we have great strengths in the individual programs, but we weren’t leveraging them to the advantage of each other.”

One program created from the Shark Tank was the Peer Undergraduate Mentorship Program (PUMP), a collaboration between the Honors College, Fellowships Office, and Center for Academic Success and Excellence (CASE). The program fosters peer-mentoring relationships.

“The benefit of Shark Tank is that it allowed us to work together and it benefits our students,” CASE Director Donell Young says. “When you have multiple areas focusing on students, this means more opportunities to help students be successful.”

The purpose of Shark Tank was to promote success across the board on MU’s campus and create academic programs that are enriching. The PUMP program has provided that and its success led to financial support being extended beyond the original period.

“We were to come forward with our best collaborative ideas,” Honors College Director J.D. says. “For me, the two offices that I think have the most natural connections with Honors are CASE and Fellowships. We all directly serve students who are talented and want to have a great academic experience at Mizzou.”

Bowers says that his involvement in Shark Tank required brainstorming and active collaboration with other program directors such as Young.

Another program that was created in collaboration with CASE was the Undergraduate Success Program. The purpose of the program is to introduce students to a variety of workshops to help make their college experience more influential.

Having received ongoing funding for two ideas through Shark Tank, Bowers cites creating a program that can evolve as being one of the keys to success.

“Something that fills a void is always a winning idea,” Bowers says. “If there is a need that you can identify, that others see as being a linchpin in helping students succeed, that’s certainly a successful thing. Both projects haven’t stayed true to the original vision, but you are creating a program that can evolve.”

“Ultimately, success is more than did you just graduate,” Bowers says. “Shark Tank was designed to provide students with more than just a minimum.”